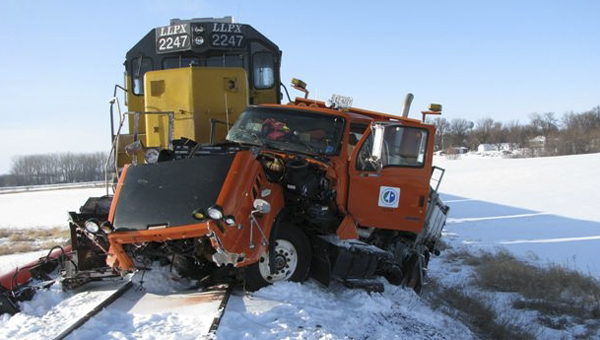 MnDOT shot this image of a snowplow crumpled by a Union Pacific engine.

KIESTER — The driver of a snowplow that was struck Friday by a Union Pacific train in Kiester is a 21-year Minnesota Department of Transportation employee, according to a department report. 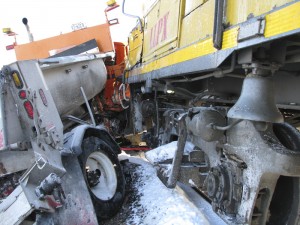 MnDOT's photo shows the damage a Union Pacific train did to a MnDOT plow Friday in Kiester.

The report recaps many of the details found in the Minnesota State Patrol summary of the crash.

The driver Bradley Bruegger, 55, of Wells, was listed in fair condition this morning at St. Marys Hospital in Rochester.

“The driver has been admitted to the intensive care unit and is conscious and talking,” the MnDOT report states Friday.

The MnDOT report says he was wearing his seat belt and was plowing at the time of the crash. The report says the cause of the collision remains under investigation.

It says the single-axle snowplow is a 2007 Sterling truck. It was southbound on Highway 22 when it was struck by the eastbound train in Kiester. The closest intersection is West Front Street.

The train pushed the plow anywhere from a half to three-quarters of a mile down the track, the MnDOT report states.

MnDOT has posted temporary stop signs at the crossing because the lights at the tracks were knocked out by the crash.