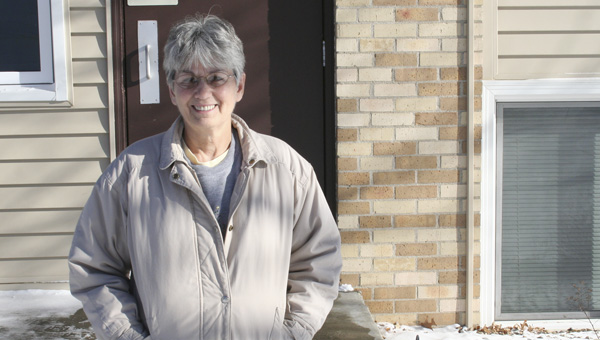 Mary Anderson stands in front of her apartment building, 914 Luther Place. It used to be free from smoke, but now she smells the secondhand smoke that wafts into her place. — Tim Engstrom/Albert Lea Tribune

Mary Anderson used to reside in an apartment in Albert Lea without the smell of cigarette smoke. Ever since a smoker moved into her building in October, she leaves during the day to breathe clean air.

“The smell when she smokes, it just seeps all over. The doors aren’t totally tight. You can’t keep it out,” she said. “That’s why I leave here in the daytime. I shouldn’t have to do that.”

There are seven apartments at 914 Luther Place, one of the several buildings collectively called Fountain Lake Estates on the west side of the city. Anderson lives on the second floor with a view of the street. The smoker is also street-side but lives on the first floor across the hall.

Randy Gulbrandson, a nonsmoker, shares a wall with the smoker, and the medicine cabinets in their bathrooms each have a small slot that allows air to pass between the apartments.

There are times when he opens his medicine cabinet and cigarette smoke billows out.

“I probably wouldn’t have moved here if smoking had been allowed then,” Gulbrandson said. “I used to be able to watch people go out back to smoke.”

That’s right. He and Anderson live in a building where smoking was not allowed, but now it is. Their cases illustrate the issues of smoking and multi-unit housing.

No smoking, then yes smoking

Fountain Lake Estates is a 63-apartment complex owned by St. Louis Park-based Minnesota Brokerage Group Property Management. Albert Lea resident Robert Hoffman has managed the property since July 2010, keeping the place up and making sure it is filled with tenants. He follows MBG’s rules, which don’t permit smoking in the common areas but allow it in apartments.

However, a former property manager deviated from those terms. Tenants say she told smokers in that building they had to go outside to smoke — even though some smokers in other Fountain Lake Estates buildings could smoke in their apartments. That is why when Anderson and Gulbrandson moved in, they thought they would be enjoying smoke-free living.

When Hoffman took over, there happened to be no smokers in that building. Hoffman said he was unaware of what the former manager’s policy was for that building until tenants began to complain about a new tenant smoking.

Hoffman also manages or maintains other apartment complexes in Albert Lea, and he has tried to help Anderson move into smoke-free units at Trailside Apartments. That 110-apartment complex — the biggest one in Albert Lea — only allows smoking under a grandfather clause. Only the smoking tenants prior to a 2008 remodel still are allowed to smoke in their apartments.

Moreover, Trailside, owned by Zumbrota-based nonprofit Three Rivers Community Action, just might go smoke-free altogether this spring, Hoffman said. All smokers would have to go outside.

Gulbrandson plans to move out in the spring anyway to a house his sister and brother-in-law own.

Anderson, however, has sent a letter to MBG. She would prefer to stay. She likes her window view, likes being close to Highway 13 and Nelson’s Marketplace and likes the Luther Place neighborhood.

“Who wants to move in the middle of winter?” she said. “Plus, I was here first.”

At the request of Anderson, Hoffman attended a meeting in Albert Lea in December with a St. Paul organization called Live Smoke Free. It invited housing owners and managers to learn more about the cost savings of smoke-free rentals and ways to go smoke-free with reasonable notice.

From white walls to brown 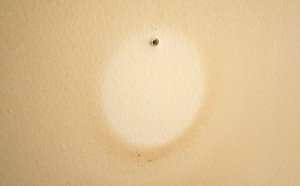 The contrast in color of the wall of a hotbox apartment at Trailside Apartments shows the kind of harm smoking can do to an apartment. The tenants moved out in an effort to quit smoking.

Hoffman said he and his wife don’t allow smoking in the two rental homes they own. And there are other apartments in town he manages where the owners do not allow smoking. However, he said he legally cannot dictate no smoking in apartments unless the owners either make it policy or give him the leeway to set such rules.

“If I owned all of the ones I managed, I would have a smoke-free policy in all my apartments,” Hoffman said. “I would in a second.”

He gets to clean a former hotbox apartment at Trailside. Smokers who couldn’t smoke in their apartments went to that one to light up. The tenants recently moved to another apartment in an effort to quit smoking.

The white walls in the hotbox have been tarnished brown, except where wall hangings used to be. The carpet below where the ashtray was is ashen. The tenants recently moved out, and an inspection from Trailside manager Lloyd Management, based in Mankato, told Hoffman that he will need to replace the carpet, refrigerator and microwave oven, in addition to paint the walls.

When nonsmokers move out, usually all that is done is shampooing the carpet, even if it doesn’t truly need it, Hoffman said.

“I’m the guy who ends up picking up all the cigarette butts,” he said. “I should know.”

Smokers like to toss butts into decorative stone-lined vegetation near the buildings and sidewalks. He bought a Shop-Vac to make getting butts out of stones easier than picking each one up by hand.

The Tribune couldn’t reach the smoker in Anderson’s building at Fountain Lake Estates. However, Kim Scott is a grandfathered smoker at Trailside. She opposes the idea of getting rid of smoking. She said smoking reduces her anxiety and helps her deal with various disorders. She lights a candle when she smokes, she said, to offset that lingering tobacco smell.

She has lived at Trailside since 2004, when it was called the Channelview Apartments. If Trailside went smoke-free, Scott doesn’t know what she would do.

“I was OK with the bars going smoke-free. That’s a workplace. But in my house, I should be able to do what I want,” Scott said. “I don’t want to have to jump into my ’jamas to go smoke cigarettes.”

Hoffman said Trailside will have tenant meetings before any decision is made on smoke-free housing.

Barb Noland also is a smoker at Trailside, but she isn’t grandfathered. She said doesn’t mind going outside and likes that her place is free of cigarette smell when guests come over.

Melanie Potts, the leasing consultant at Trailside, said tenants can smell smoke when they walk past apartments where smoking occurs and said it particularly bothers tenants with asthma. And she said for new tenants who smoke, they never seem to have a problem with going outside. 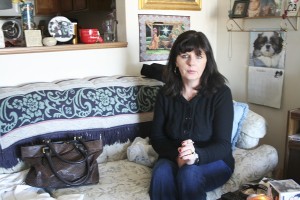 Kim Scott can smoke in her apartment at Trailside Apartments because she is grandfathered from following the existing no-smoking policy. She was a smoking tenant before the 2008 remodel of the complex.

MBG has had Fountain Lake Estates on the real estate market since June.

“We do know that having a smoke-free policy can affect the savings a company would have,” she said.

The general manager for MBG Property Management, Chris Cooper, said he sees the virtues of smoke-free apartments and said making a property smoke-free is “a tough call. A lot of our socio-economic market smokes.”

Just because smoking is allowed doesn’t mean a place is dingy. MBG bought Fountain Lake Estates in 2007 and went to work fixing it up.

“I take an enormous amount of pride in the change we have effected at Fountain Lake Estates. We have gone to great lengths to make it nice, clean facility,” Cooper said.

He, like Hoffman, was unaware of what the former property manager required at 914 Luther Place.

“If I were a nonsmoker, offended by smoke, and my new neighbor was a chain smoker — I am absolutely sympathetic to the disruption that may cause,” Cooper said. “That said, Fountain Lake Estates has never been a smoke-free facility.”

He added that it is difficult to tell someone they can’t smoke in their own home if they didn’t move into it under a smoke-free context.

Larsen said Anderson’s situation shows why Live Smoke Free encourages nonsmoking tenants to get the smoke-free policy in the lease before they move in.

“It’s really too bad that this happened because they wanted to live in smoke-free apartments.”

“If he can’t do something about it, I probably will have to move,” she said.