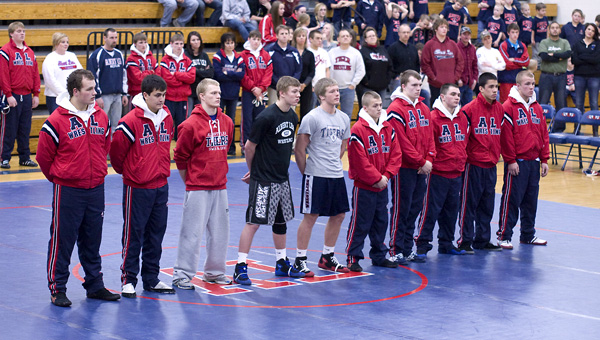 Albert Lea wrestlers came out victorious against Faribault 54-12 after a brief senior recognition ceremony on Thursday.

Knowing Faribault had done well early on in the conference, Tigers coach Larry Goodnature was pleased for the meet to be over with and in Albert Lea’s favor.

“They have a good team and good traditions, so I wanted to make sure that we went out there and wrestled tough,” Goodnature said. “The kids did. They went for the fall and that’s what I ask of them.”

The night started with an introduction of the future of Albert Lea wrestling, the youth wrestling team.

Then, lining up around the outside of the mat as they were introduced, Albert Lea’s varsity and junior varsity wrestlers and their parents were recognized.

Finally, 10 of Albert Lea’s wrestlers stepped forward to be acknowledged as seniors who will be leaving the team after this season.

The youth wrestlers anxiously waited in the bleachers to make a tunnel for the varsity’s entrance.

Trevor Westerlund, at 106 pounds, got the Tigers off to a 6-0 start as he pinned Faribault’s Joshua Amacher in two minutes and 31 seconds. Garrett Wangsness (113) pinned Ryan Mullennex at 3:09 giving the Tigers a 12-0 lead.

Dakota Wangsness (120) won a 5-0 decision over Faribault’s Brandon Peters. Both Wangsness and Peters were entrants in the state tournament last year, with Wangsness placing sixth.

“That was a good match and a good one for Dakota because in individuals, that will be good seeding for us,” Goodnature said.

Senior Tylor Nelson (126) pinned his opponent Blake O’Neil at 1:12. Nelson has been a wrestler for 11 years and has plans to enlist in the Marines after high school.

“We were beaten by that kid last year and this year we turned it around,” Goodnature said. “So that was another great match.”

Albert Lea had a 36-3 lead when senior Dustin Samudio (170) was pinned at 2:53 by Cole McAdam. Samudio has wrestled for four years and plans to enlist in the Air Force after graduation.

Even though Derek Sipple (182) lost an 8-2 decision to Mat Becker, Goodnature gave him praise because Becker has also been a state entrant. Sipple has wrestled for five years and plans to attend Riverland Community College in the fall.

Tayler Blake (195) won by forfeit because Faribault’s Logan Hortop is recovering from a broken hand. Blake has wrestled for six years and has plans to attend the University of Wisconsin.

Both Jace Talamantes (220) and Bryce DeBoer (285) pinned their opponents giving the Tigers their 42-point win.

The remaining four seniors, Stephen Samudio (138), Brody Sundblad (145), Dalton Westerlund (160) and Trey Hable (170) did not compete against Faribault but all have plans to continue their education after high school.

Goodnature said he has enjoyed seeing his team improve, especially the upperweights that hadn’t been on varsity for very long.