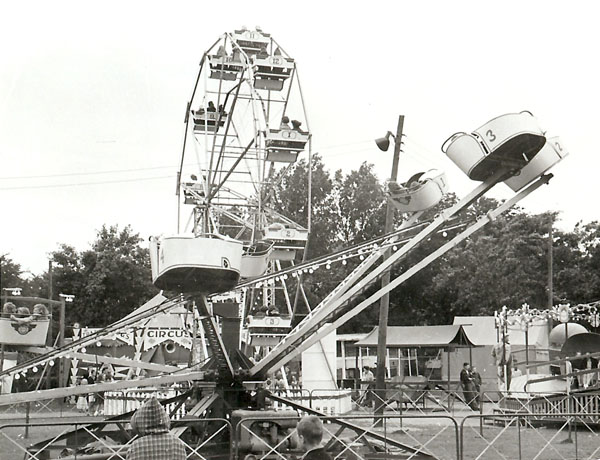 Albert Lea’s Morin Park on West Main Street has been used for many activities through the years. A good example is the carnival that was set up in this park for the city’s Colonel Albert Lea Days celebration in 1941.

Editor’s note: This is the first of a four-part series featuring some of Ed Shannon’s best Lifestyles features. The following article was published June 12, 2010. 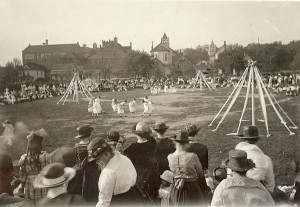 This photo was taken before 1920 and shows a Maypole dance event in what’s now Morin Park. The buildings in the background, from left, are Central School, First Baptist Church, and Lutheran and Presbyterian churches.

Through the years what’s now Morin Park has evolved from a prairie pond with several names to a city park with several names during the past 131 years. Also, during those years the facilities and usage for this particular park have had some significant changes.

Today, this part of the city’s park system is designated with the name of Morin and based on the full block between West Main and William streets and Euclid and St. Mary avenues.

However, during the first several decades of its existence as part of a growing community, this block plus some nearby land, was part of a shallow prairie lake. It was originally given the name of Merry’s Little Lake (Lorenzo Merry was one of the city’s first residents.) A few years later it acquired the name of Morin Lake, a title based on pioneer William Morin who then owned a good portion of the community’s west side. And still another name, Spring Lake, was based on the source of water that maintained this part of the prairie landscape. 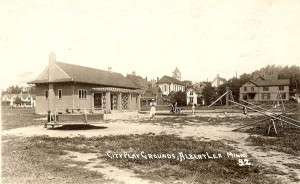 One of Albert Lea’s first playgrounds for children was located in what’s now Morin Park near the original shelter house and wading pool. See the merry-go-round and the teeter-totters, or seesaws.

By 1880 this once pristine lake was becoming a garbage dumping ground. The decision was made by Morin, Clarence Wedge and Mary F. Armstrong to donate the property to the city for use as a park and to drain the lake. The drainage project was completed in 1881.

Morin, incidentally, has the rather unusual part in county history of being the person responsible for the removal of this small lake in Albert Lea and the creation of what’s now Morin Lake in Alden.

The original name for this block was Spring Lake Park. In later years the Morin name became its official designation.

Through the years this particular park became a popular and well used part of Albert Lea’s recreational life. There were three factors responsible for this.

First, was certainly based on its location near the center of the city and in a residential neighborhood. 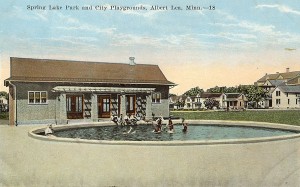 This old postcard helps to prove that Morin Park was originally known as Spring Lake Park. It shows the first shelter house and a small wading pool for children. Thus, a century ago Albert Lea had an shallow outside pool of water that predated the present municipal swimming pool.

Second, for many of the early years of its history Albert Lea didn’t have too many parks in its system. In fact, the 1911 History of Freeborn County book lists City (now Central) Park, Spring Lake (now Morin) Park, Frank Hall Park, Armstrong Park (near the corner of Fountain Street and West Avenue which no longer exists) and Lake Drive (based on the shoreline on the west side of Fountain Lake).

Third, was its location only a block or two south of the city’s Central School and later Albert Lea High School. Thus, the park became a popular and logical place for physical education classes during days with good weather, plus other school-related activities. Use of the park obviously declined with the high school’s relocation.

At the present time those facilities are based on the picnic tables, play apparatus, baseball, basketball, softball and two bleachers. The present shelter house structure is now used as a park department shop.