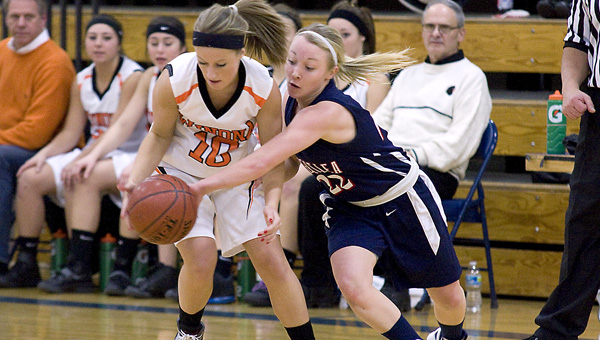 McKenzie Zuniga, who only played three minutes of the game, made a 3-pointer with four seconds left on the clock in the second leaving the Tigers with a 25-point loss.

Ellen Blacklock scored for Winona within the first minute of the game. The points were returned by Bryn Woodside seconds later before Audrey Scharmer and Blacklock went on a 10-point run for Winona.

With 14 minutes left on the clock, the score became 13-3 when Nya Chan ended Winona’s streak by shooting a free throw.

With just over six minutes left in the half, the Winhawks widened the point gap with a nine-point run.

The half closed out with Winona leading 31-12.

“We did a few things well, but we found a lot that we need to work on next week,” Gorman said. “We did a lot of switching up, which helped, but I think we need to identify key players and play defense a little better.”

The two Winona players that caused the most trouble for the Tigers on Friday were Scharmer and Blacklock. Scharmer scored 16 total points with eight rebounds and three steals. Blacklock had 14 points, one assist, five rebounds and two steals.

“The first half we came out a little flat,” Gorman said. “We need to execute better on the offensive end and defensively we didn’t identify with them very well. They have a lot of good forwards and we’re used to guarding more post players.”

Gorman was filling in once again for Tigers coach Sean Gillam, who, according to Albert Lea School District Superintendent Mike Funk, has been placed on paid administrative leave pending the results of an investigation.

The second period looked more promising for the Tigers as they kept up with Winona in points. At the 12-minute mark, the Tigers had scored eight points to the Winhawks’ 10.

Over the next three minutes, the Tigers brought the game within 18 points but couldn’t get it any closer. Winona led the rest of the half outscoring Albert Lea 33-27.

“We had a lot of steals,” Gorman said. “I can’t say we converted all those to points but that’s the way it goes sometimes.”

Gorman said another problem the Tigers had was getting down the floor.

“We weren’t getting back very well and we gave up a lot of easy shots like that,” Gorman said.

Albert Lea’s next game is Tuesday against Owatonna at 7:30 p.m. The Tigers and Huskies will come together to raise cancer awareness, and a donation will be presented to Albert Lea’s athletic trainer Afton Wacholz on behalf of Relay for Life.