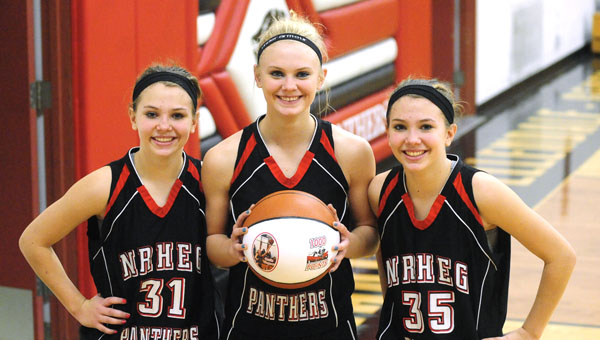 Ten games into her sophomore season, the dynamic point guard has been a two-time conference champion, an All-State honorable mention, Division I recruit and 1,000-point scorer. Most recently, Carlie became a teammate of her sisters, Maddie and Marnie, identical twins who joined the Panthers’ varsity roster on Wednesday at just 13 years old. 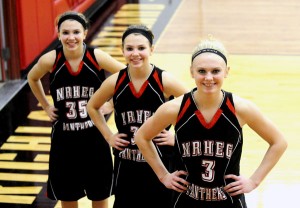 “It’s been fun,” said Carlie, who scored her 1,000th career point on Thursday in a 26-point rout of ninth-ranked St. Peter. “It’s been fun to see them blossom, learn and pick it up really quickly. It’s fun to watch them mature.”

Maddie and Marnie joined the Panthers’ varsity team as seventh-graders and play two halves of B-squad and one half of varsity each night, within the rules of the Minnesota State High School League. The huge leap from sixth-grade basketball a year ago to playing on one of the state’s top varsity teams has been an easier transition with the presence of Carlie, who’s familiar with lofty expectations at a young age after joining varsity as an eighth-grader.

Carlie’s advice for her sisters, three games into their careers, has been to just have fun.

“I tell them to love the game and play it because you never know what’s going to happen,” Carlie said. “Look for your teammates all the time and just have fun when you’re playing because that’s what it’s all about.”

Despite being a prolific scorer, Carlie’s advice to pass comes as no surprise. While she’s averaged 30 points per game this season, Carlie also leads her team with an average of 5.2 assists, and when it comes to records, scoring is second fiddle.

Wagner added her favorite play isn’t a drive to the hoop but a no-look pass to her best friend and classmate, Jade Schultz, for a 3-pointer.

“There’s no better feeling,” she said.

No record is safe from Carlie, who will accumulate plenty of points, rebounds, assists and steals in her five-year varsity career. In fact, at her current pace, Carlie could score more than 3,200 points by the time she graduates, if she stays healthy. That scoring mark would land her fifth all-time in the state but plenty short of the 3,888 scored by the all-time leader, Tayler Hill, a 2009 graduate of Minneapolis South.

Whatever records Carlie sets, the sophomore said her sisters may not be far behind. According to Carlie, Maddie and Marnie are even further developed as basketball players than she was at their age.

“They have a lot of potential,” Carlie said. “They’re strong and speedy with a nice shot and have a keen eye for looking out for each other.”

The twins have combined to score 11 points in three games on varsity, and Panthers head coach John Schultz said it’s their poise that allowed him to promote them to the state’s sixth-ranked team.

“There’s no fear,” Schultz said on Monday, following the team’s win over Tri-City United. “They played again tonight and you’d guess they had been on varsity for a couple of years. Their ability to score and create offense is valuable, and they hit 3-pointers and finish fast breaks a lot like Carlie. There’s no deer in the headlights. They’re totally at ease with it.”

Maddie and Marnie, who grew up playing basketball with Carlie in the family’s garage in rural New Richland, each admitted they were nervous before their first varsity game, but once they were called to the court, the butterflies disappeared.

“Once I started playing I didn’t notice anything,” Marnie said. “I just played normal. It was really exciting.”

The transition from playing 12-year-olds last year to high school juniors and seniors isn’t as easy as the twins make it look, though. They both said there are a few major differences.

“They’re bigger and stronger,” Maddie said. “A lot quicker, too.”

While Maddie and Marnie’s varsity careers are just beginning, Carlie’s is well on its way to being one of the best in school, if not state history. Since joining the Panthers for the 2009-10 season, NRHEG is 54-11 with two Gopher Conference titles.

After averaging 20.4 points and more than four assists and steals per game last season as a freshman, Carlie, who stands 5 feet, 10 inches, began to garner national attention. University of Minnesota women’s basketball coach, Pam Borton, visited Carlie at the Panthers’ first practice this winter, and Shalee Lehning, an assistant coach at Kansas State University and member of the WNBA’s Atlanta Dream, watched her play on Nov. 29 in a 34-point performance against LeSueur-Henderson.

“It’s kind of cool,” Carlie said. “It’s kind of scary because you don’t expect it to be happening this young, but it’s happening more and more and it’s cool to see the opportunities that you’re going to have.”

Playing at the next level would come natural to Carlie, who said aside from school, basketball is her life.

“It’s what I do,” she said. “I get excited when it’s game night, and we have the best fan base. With all my friends and family there it just makes it fun. I’m loving it.”

For Maddie and Marnie, the move to varsity couldn’t have come at a better time. It was during their second game on the A-squad when Carlie notched a layup to score her 1,000th career point. Maddie said it was a special moment, especially from the bench.

“I was super excited for her, of course everybody was,” Maddie said. “I wanted to give her the first hug but somebody beat me to it.”

Carlie said after she scored No. 1,000, with about 30 seconds left in the first half of the St. Peter Tournament’s finals, the game was stopped and she was presented with a personalized basketball by coach Schultz. The ball had a photo of Carlie shooting a layup printed on it along with “NRHEG 2011-12.” Carlie said it’s currently displayed on a shelf in her room.

Let’s hope she has enough room for two more.