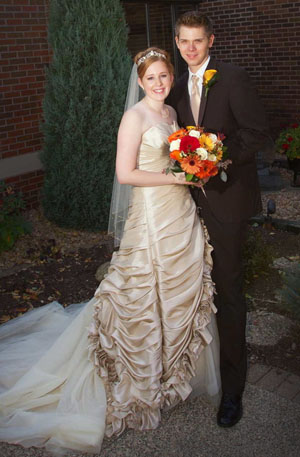 Flower girl was Addison Halla, friend of the couple, daughter of John and Shannon Halla, of Rosemount.

Best man was Aaron Wuerflein, friend of the groom, of Emmons.

Vocalist was Jodi Blong and pianist was Lisa Dahl, family friends of the bride.

Personal attendant was Lisa Jacobs, of Eagle Lake, friend of the bride.

Guest book/gift attendants were Shannon and Azlynne Halla, of Rosemount, friends of the couple.

The bride graduated from Albert Lea High School in 2007 and from St. Catherine University in 2010 with a bachelor’s degree in elementary education. She is a first-grade teacher at St. Theodore’s Catholic School in Albert Lea.

The groom graduated from Glenville-Emmons High School in 2006 and from Riverland Community College in 2009 with an associate’s degree in industrial maintenance. He is a maintenance mechanic at Mrs. Gerry’s Kitchen.

After a wedding trip to Orlando, Fla., the couple resides in Albert Lea.