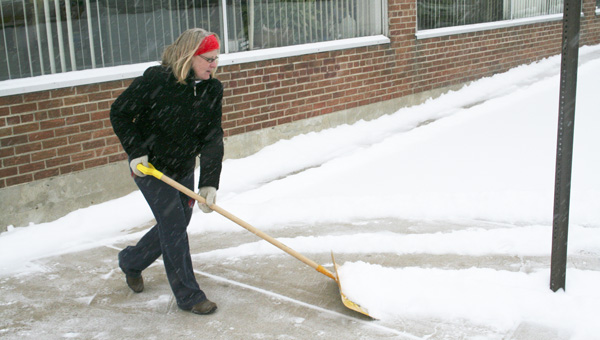 Gayle Neist of Litho Printing & Graphics scoops snow from the sidewalk along Washington Avenue in downtown Albert Lea. She said people who wanted snow finally have it, but she’d rather skip the white stuff. -- Tim Engstrom/Albert Lea Tribune

Finally, snow is covering all of the ground this winter.

About 4 inches had fallen in Albert Lea as of 8:30 a.m., with snow expected to continue today to about 3 p.m.

Lake Mills and Northwood-Kensett were among several school districts in northern Iowa that canceled classes for the day. Minnesota schools, however, stayed on schedule. Albert Lea had a staff development day anyway.

A winter weather advisory is in effect for the area until 6 p.m. today, and the National Weather Service said that roads could become covered in snow and potentially hazardous. Accumulations of 3 to 6 inches are likely. Saturday and Sunday may see a mix of freezing rain and snow.

This winter largely had been a brown one, thanks to jet stream patterns that have prevented cold Arctic air from going south. The shift has delivered extra snow for Alaska and Canada but spared much of the northern United States.

The question is: How long will the snow stay around?

The forecast for Albert Lea, according to KIMT meteorologists, says the high on Saturday will be 13 and on Sunday 31. It says a little snow could fall Sunday, with wind gusts hitting 25 mph.

High temperatures should hover in the 20s this coming week until Thursday, when the area could climb above the thawing mark once again.