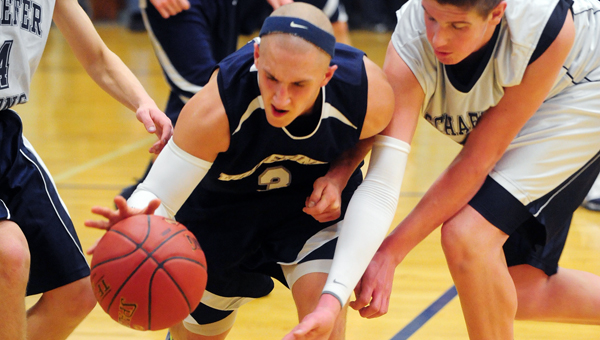 GLENVILLE — The Glenville-Emmons boys’ basketball team used a 17-2 run over the final 10 minutes on Thursday to beat Schaeffer Academy 54-33 in its home opener.

Wyatt Madson had 15 points and seven rebounds, and Tyler Belshan had nine points, eight rebounds and six assists, including a buzzer-beating 3-pointer to end the first half, as the Wolverines allowed only 14 second-half points to wins its third straight game.

Glenville-Emmons jumped out to a 26-10 lead with 5:40 left in the first half after back-to-back 3’s by Madson and Derek Olson. The Lions responded with seven unanswered points out of a timeout, but Belshan’s 3-pointer as time expired gave the Wolverines a 31-19 lead at halftime.

“The first eight minutes was just outstanding,” Wolverines coach Dan Fredrickson said. “Defensively we got a little sloppy with our rotations at the end.”

The Lions’ Luke Harris got a steal and layup to open the second half, and Schaffer Academy went on a 12-6 run to pull within 37-21 with 10 minutes remaining.

A layup by Trent Thoms, who have eight points and a team-high 10 rebounds, extened the Wolverines’ lead back to eight and started the 17-2 run to end the game.

The Lions’ only field goal over the final 10 minutes was made by William Dorrow with 40 seconds remaining. It was Dorrow’s first varsity basket.

Fredrickson said the Wolverines’ made an effort to keep the ball out of the middle of their zone during the second.

“I thought we did a nice job of suffocating the middle in the second half and keeping the ball in what we call the “funnel,” Fredrickson said. “We were keeping it out of the middle and attacking passing lanes.”

Olson had 12 points on three 3-pointers in the first half and finished with 14.