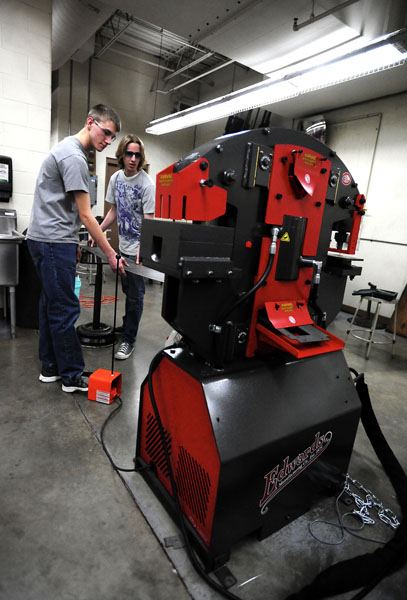 When people really want something, sometimes all they have to do is ask.

That was recently the case for Albert Lea High School industrial technology and engineering students. When they asked for sponsorships and donations for their super-mileage car project, they received a lot more: a 40-ton ironworker with a 40-ton shop press and 10-ton tube and pipe bender from Edwards Manufacturing in Albert Lea.

In all, the school received $16,000 worth of free equipment.

“I was ecstatic,” Mike Sundblad, the school’s industrial tech instructor, said. “It was a superb donation — just couldn’t thank them enough for doing this.”

The donation was a big surprise for ALHS staff and students; however, a family tie played a big role in making the gift a reality.

Doug Friend, chief operating officer at Edwards, and his wife, Alex, the chief financial officer, have a son, Ashton. He is working on the super-mileage car at the high school. When Ashton and his friends sought donations and support for the super-mileage car, Doug answered the call and visited with instructors in January. He just went beyond what was requested, merely being the car sponsor.

“We started thinking that we could do a little better than that,” Doug said.

Doug and instructors talked about new metal-bending machinery. They discussed what would be feasible for the shop space and how instructors would receive training from Edwards Manufacturing.

So in January, Edwards Manufacturing delivered the equipment and helped set it up. Within days, students were using the brand-new machinery to bend metal for practical applications. Though students previously had a 20-some-year-old, 50-ton press, the new equipment has more options and is what students will see if they enter the metals industry.

“It’s more realistic for what we do,” Sundblad said. “A lot of things get bent into shape, not welded anymore. It’s more like what we see in the industry.”

Sundblad said students can now make pieces such as support beams and roll cages, or arms and extensions for the high school’s robot.

“We can bend the part that we need rather than having to cut multiple parts and having to weld them together.”

Though giving valuable equipment away may not have been the easiest thing for Edwards Manufacturing to do, the decision was worth it and will remain that way.

“It’s to support our local community, so it’s not a burden,” Doug said.

He added that many students — whether they go to four-year schools, two-year schools or only finish high school — will remain in the community once they find jobs. For some of them, that could mean working at Edwards Manufacturing and already being familiar with the equipment. Others will find manufacturing jobs elsewhere, but Doug knows donating the equipment for education is good support for the American manufacturing industry.

“Manufacturing is important to the U.S. economy, for sure,” Doug said. “And it’s important that kids know there is opportunity in this industry, or beyond the industry.”