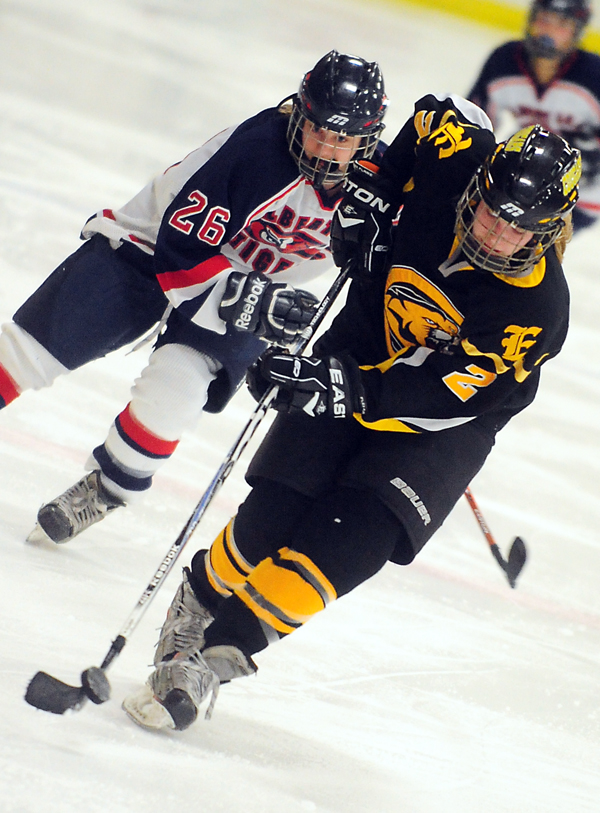 What can one win do?

The Albert Lea girls’ hockey team is about to find out.

After stumbling to a 1-14 start to the season and losing three straight games heading into its regular season finale on Thursday, the Tigers notched its fifth and biggest win of the year — a 3-2 thriller over No. 11-ranked Mankato East at Roy Nystrom Arena.

After a scoreless first period, the Tigers sped to a 3-0 lead in the second but nearly squandered it in the third. 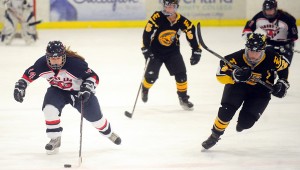 The Cougars scored two power-play goals in 80 seconds and looked poised to hand Albert Lea its 20th loss of the season.

East was 2-for-2 on power plays in the final period when it received a third with 3:27 to go. The Tigers were unable to clear the puck for all but seconds of its penalty kill but its defense stood pat, and goalie Katie Schwarz — a ninth-grader who recorded 28 saves — looked more like a senior on Senior Night.

“Katie played very well,” Tigers coach Paul Willett said. “She’s a young goaltender, she’s had her ups and downs, she’s coming off a couple of tough games and she stepped up and played probably her best game of the year tonight.”

The Tigers were outshot 30-15, including 10-5 in its three-goal second period, but goals from Natasha Moyer, Anna Anderson and Sydney Overgaard was all it needed.

“We’ve had a tough season,” Willett said. “To come out against a top-11 team in our last game before sectionals and pull out a victory is huge for these kids.

“Our kids are pumped right now.” 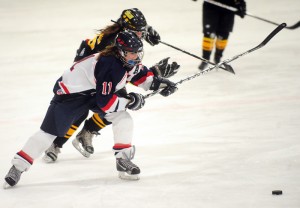 Albert Lea’s Anna Anderson (11) chases the puck on Thursday during the third period of a 3-2 win over No. 11-ranked Mankato East. Anderson scored the game’s second goal. -- Andrew Dyrdal

The impressive win over the second-place team in the Big Nine Conference gave the Tigers something to hang its helmets on, but more importantly, much-needed momentum heading into the postseason.

The Tigers open the Section 1A Tournament on Wednesday, likely at Northfield, according to Willett.

Moyer, who scored the game’s first goal and was one of Albert Lea’s four seniors to play their final home game, said the Tigers have played stronger and more like a team in the final month of its season.

Albert Lea broke a 12-game losing streak at the start of January with back-to-back wins over Faribault and Mankato West. Its most impressive win before Thursday was 6-5 in overtime against Rochester Century on Jan. 12, and it finished 4-5-1 over its final 10 games after a dismal start.

“We just want it more since the season’s almost over,” Moyer said.

The Tigers were outshot 5-3 in a humdrum first period that had no penalties.

Albert Lea laced only five shots on goal in the second but more than half went in, including the first — Moyer’s — off an assist from Mariah Leach 5:16 into the period.

Anderson, the Tigers’ leading scorer, split the pipes on a power play at 8:25 off Leach’s second assist, and Overgaard gave Albert Lea a three-goal lead off an assist from Sam Stanley with 64 seconds remaining.

“We took away their game in the neutral zone,” Willett said of the second period. “Anderson did a great job keeping their best player away from the puck, and we really didn’t allow any quality opportunities. We were fortunate enough that when we did have the opportunity to put the puck in the net we were able to finish.”

While the Tigers’ offense came alive in the second, it was goaltending that was the story of the opening two periods.

“Our coaching staff is incredibly proud of (Schwarz),” Willett said. “That gives her some confidence heading into the playoffs as well.”

The Cougars matched the Tigers’ shot total for the game in the third period, sending 15 shots at Schwarz and scoring on two of them.

East scored at 4:33 with the Tigers’ Mackenzie Waldemar and Stanley in the penalty box, and again at 5:53 before Stanley was let loose.

Trailing 3-2, the Cougars went on a fourth power play with 3:27 remaining but were shutout before pulling its goalie for the final 45 seconds.

Willett said on its final penalty kill, the Tigers did exactly what it needed to.

“We contained when they had control of the puck, and we pressured hard when the opportunity was there,” he said. “For the most part, we kept the puck to the outside, which is what we wanted.”

The Section 1A seeding will be released on Sunday, but with a 2-6 record within the section and 5-19-1 overall, the Tigers have virtually no chance at a home playoff game.

That made Thursday’s win, in the final home game for four seniors, that much more special.

“It feels great,” Moyer said. “I don’t know what it was but we all wanted it. It feels so good.”