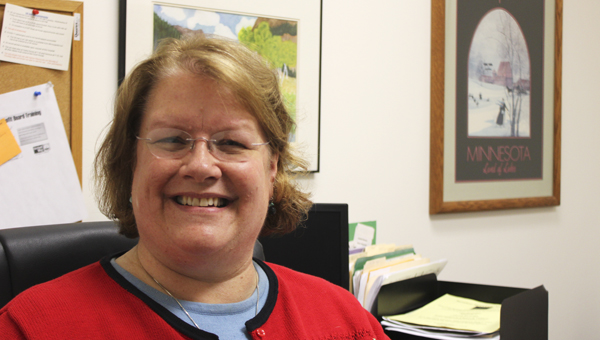 Annette Petersen sits in her office at Senior Resources of Freeborn County. The nonprofit’s offices are at the back of Skyline Plaza. -- Tim Engstrom/Albert Lea Tribune

With more than 15 years helping seniors under her belt, Annette Petersen is leading the charge in senior services here in Albert Lea.

Petersen, the new executive director at Senior Resources of Freeborn County, was promoted Feb. 1 after 15 years with the organization.

“I’m pretty familiar with what goes on around here,” Petersen said.

It took a while before Petersen found her calling, however. Armed with a degree in marketing from Minnesota State University, Mankato, she worked in various fields and even owned a small business for some time before she saw a job posting for a program supervisor at Senior Resources. Soon enough, Petersen led the Retired Seniors Volunteer Program.

She worked five years as head of the RSVP before becoming the advocacy group’s head, where she worked on behalf of frail seniors.

“It seemed like such a good fit for my business experience, and my appreciation for seniors,” she said.

Once the executive director position came up, she jumped at the chance. Now that she’s in the top spot, she’s excited to help people in a larger fashion.

“It’s about giving back to the community I live in, but also doing something that’s worthwhile in my life,” Petersen said.

Petersen will spearhead some of the initiatives Senior Resources will start in coming months, including figuring out which local groups provide overlapping services and how to streamline those services for seniors. In addition, Senior Resources will form a task force with the city of Albert Lea and the Senior Center on preparing for the influx of baby boomers who will need more services and social activities as they grow older.

“We have this large influx of seniors coming into the population,” Petersen said. “As a community, Albert Lea is really trying to make itself appealing.”

Though she’s certainly kept busy by her various civic duties and passions, Petersen knows the work she’s doing helps other people, which makes her proud.

Age: 54
Address: Wilby Circle
Livelihood: executive director at Senior Resources of Freeborn County
Family: One son and daughter-in-law in Rochester with four grandkids, one daughter in Albert Lea, mother and father also in Albert Lea.
Interesting fact: Her favorite movie is “Out of Africa.”