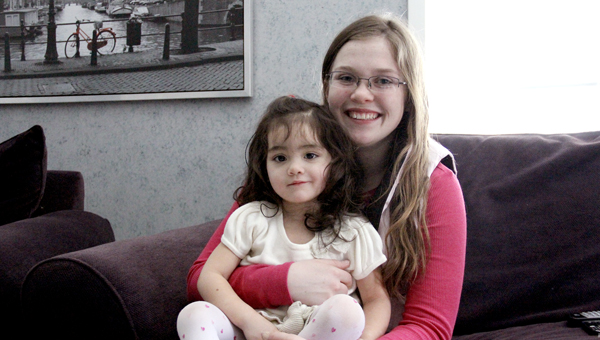 Amelia Holcomb sits with her daughter Elena at their Albert Lea home. Holcomb brings Elena to as many activities in her busy schedule as possible so that she doesn’t always have to leave her. -- Brandi Hagen/Albert Lea Tribune

Amelia Holcomb cannot make plans with anyone or go anywhere unless her planner is in reach.

It wasn’t always that way.

Holcomb, 22, had a realization when at age 14 her family moved from small town Albert Lea to New York City. 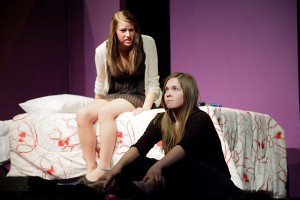 As a quiet middle-schooler, she decided she had to get involved in her school and the community or she would only ever know the people she lived with.

The move lasted just a year before the Holcomb family moved back to Albert Lea in 2005. Holcomb started to load up her schedule with choir, theater, band, track and tennis.

Now, as a licensed practical nurse at St. John’s Lutheran Home, a single mother, Student Senate president at Riverland Community College in Austin, a choir member and a student in her final semester, Holcomb still finds time to participate in college and community plays and musicals in the Albert Lea and Austin areas.

Holcomb said she wouldn’t have it any other way; she can’t just sit around at home. With help and support from her family, she doesn’t have to.

Her most recent role in the theater was as Christopher Robin in “Winnie the Pooh: A Christmas Tale” which ended Saturday at the Marion Ross Performing Arts Center.

Holcomb has played the role of a child before in the theater setting, and as the oldest of seven in her family, she knows children.

“I’m pretty familiar with how younger kids interact with their environment and compose themselves in their imaginary worlds because I’ve watched it again and again over the years,” Holcomb said.

Now that “Winnie the Pooh” is over, Holcomb is looking forward to doing “Rent” in April at Riverland’s Austin campus.

In the meantime, she will be spending a lot of time in the Hennepin Theater District watching traveling shows. She said she enjoys watching other actors being dramatic and watching the “whole kit and kaboodle” instead of just portions of a show.

Holcomb said it brings a lot out in actors to perform, but for her it’s just for fun.

“It’s just an enjoyable thing to play another character,” Holcomb said. “I kind of do the wacky impressions thing in every day life so it’s just a daily thing. Even if I don’t have rehearsal I’m doing something strange.”

Holcomb said she must be doing something right because she has never taken a theater class but has been picked for a handful of roles. “Rent” will be her ninth play.