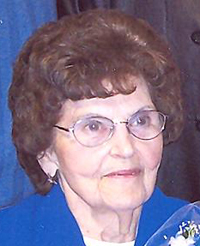 Born in Clarks Grove on July 22, 1920, Avis was the daughter of Albert and Helen (Larsen) Larson. She attended school in Albert Lea, and graduated in 1937. She married Eldert DeRaad on Jan. 10, 1944, in Clarks Grove. She had been a member of First Baptist Church in both Clarks Grove and in Albert Lea during her life. Avis enjoyed baking, decorating and spending time with her family and friends.

She was preceded in death by both of her parents; her husband; one son, Dennis; one son-in-law, Paul Nielsen; two granddaughters, Melissa and Sara DeRaad; and four brothers: Robert and his wife Deloris, Charles, Ralph and John Larson.

Funeral services will be held at 2 p.m. Saturday at First Baptist Church in Clarks Grove, with the Rev. Jamie Cameron officiating. A private family interment will take place before the service at Clarks Grove Cemetery.