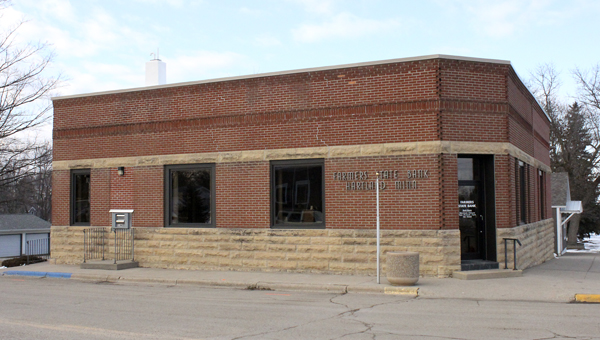 Farmers State Bank is celebrating 100 years of being in business in 2012. -- Brandi Hagen/Albert Lea Tribunere

HARTLAND — A celebration is in the making to recognize Farmers State Bank’s 100 years of existence.

Farmers State Bank President and CEO Nancy Skophammer said there likely will be a golf outing and some sort of feed.

“I think it’s an opportunity to share with the third-, fourth-, fifth- and sixth-generation customers whose anscestors were part of the original group who started the bank in 1912,” Skophammer said.

The original group was made up of businessmen and farmers in Hartland who pooled their money together to have a locally owned bank to do their business in.

Skophammer said part of the reason it took so long was because communities weren’t thriving like they were in 1912. The two world wars caused significant depression, laws were in place that didn’t allow banks to branch out and many banks didn’t make it through the stock market crash in 1929.

In 1933 Skophammer’s father, Joseph, started to buy stock of Farmers State Bank. As the years went on he acquired more and more. By the mid-1980s, the Skophammer family owned 100 percent of the stock.

The Skophammer family has owned the bank ever since. Skophammer said that’s how it works with many independently owned banks. They are owned by one family and for many generations.

Both of Skophammer’s parents have passed, but she feels there is a legacy to uphold, and she feels honored to be a part of their success.

Joseph did business for the bank for more than 75 years and his wife, Leah, was involved for about 60 years.

Skophammer said the bank was something she learned about as soon as she was cognitively able.

“Being raised in a family business, it’s a part of who you are as you grow up,” Skophammer said.

She said she started in the bank by counting coins for her dad when she was in grade school and as she got older, she worked on more significant tasks.

Skophammer said sometimes the decision to branch out has been overwhelming but it has been a very good one.

To commemorate the 100 years, the bank is collecting trinkets to put on display that they have given out over the long span of time. Some of the items include pins, piggy banks and rain gauges. Right now, the memorabilia is on display at the original Hartland branch, but Skophammer said it would be fun to have one in their other two branches.

“It’s an extraordinary milestone to reach when you think about what has happened in banking over the last 30 to 40 years,” Skophammer said. “That’s why we celebrate. We’ve lived through a lot of challenges and we’ve grown tremendously. It’s a pleasure to have this kind of success and duration.”

The celebration is tentatively planned for June and will be held in Hartland because that is where the bank originated.