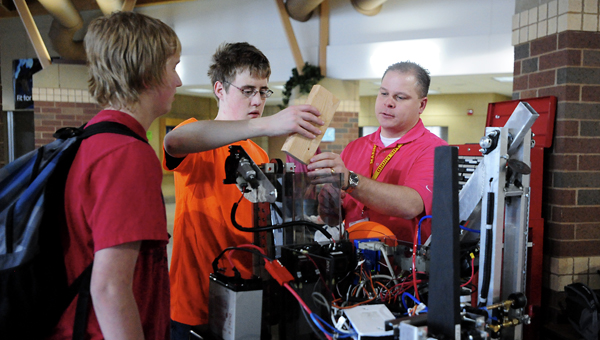 McGivern and about 30 other students who make up Albert Lea High School’s robotics team, named Catalyst, put the finishing touches on its robot last week — a basketball slinging, aluminum-bodied work of art.

The ALHS robotics team is in its second season this year and set to participate in the regional FIRST Robotics Competition at Mariucci Arena in Minneapolis.

The regional competition is one of 70 around the world and is slated for March 29-31. This year’s theme is “Rebound Rumble,” and teams can qualify for the FIRST Championships held at the Edward Jones Dome, home of the NFL’s St. Louis Rams, and the state tournament (robotics on Aug. 25, 2011, became an official Minnesota State High School League-sponsored activity). The state tournament will be held at Williams Arena in Minneapolis.

Each robotics team set to participate in regional competition was given two boxes of parts on Jan. 7 at Minnesota State University, Mankato, and had 6 1/2 weeks to design and built its robot. The parts given to first-year teams valued $6,500, and those given to second-year teams, including Albert Lea, was worth $5,000. Teams in their third season or later were required to pay for the parts, usually through sponsorship.

One of the team’s faculty advisers, Ken Fiscus, said the team worked around 1,000 man hours building its robot, and students were at the high school seven nights a week for 6 1/2 weeks working.

The object of the regional competition will be to score as many points as possible through a series of tasks. Teams can score by shooting basketballs through four different hoops set at various heights or by teaming up with another robot on a teeter-tottering bridge.

Each contest, played among six robots on a basketball-style court, lasts two minutes. The robot must compete autonomously over the first 15 seconds, and Albert Lea’s team will control it using hand gestures and a Microsoft Kinect system.

McGivern said regional competition rivals the state wrestling tournament in terms of noise and that Albert Lea will bring plenty of fans.

The team’s robot weighs 116 pounds and has six-wheel drive, powered by a battery that can produce 1.2 kilowatts of energy. The machine picks up balls with a belt system and shoots them using a catapult.

McGivern said the team hopes to win but the process of designing and building a robot and seeing it work well has been enough satisfaction.

“Isn’t there just something awesome about building a robot?” he asked. “It has blown my mind.”