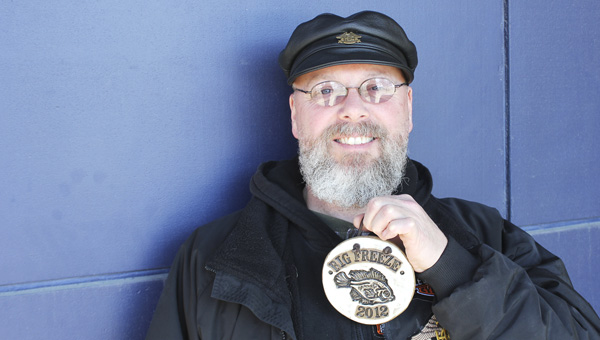 A man Friday morning found the medallion and won $300 in Chamber Bucks in the Big Freeze Medallion Hunt.

Albert Lea resident Dale Christenson, 53, found the medallion in a bag by two crossed sticks on the right side of the path at St. Nicholas Park on the southeast shore of Albert Lea Lake.

He promptly took the medallion to the office of the contest sponsor or organizer, the Albert Lea-Freeborn County Chamber of Commerce.

Christenson said he didn’t bother hunting for the medallion on Monday, Tuesday or Wednesday because the clues didn’t offer any hints that brought a location to his mind.

But he listened to Thursday’s clue on KATE-AM Radio and this struck a bell: “The long and winding road will lead you there.”

Because he works in Austin and takes Freeborn County Road 19 sometimes, he thought of St. Nicholas Park. The line “Santa’s your friend” only confirmed his thoughts. But he didn’t find it Thursday.

So on Friday morning, Christenson went to the Albert Lea Tribune’s website to get the last clue as soon as possible.

“If you’re on the path, you really are hot. Now look for nature’s ‘X’ for it marks the spot.”

People were scouring St. Nicholas Park on Friday morning looking up, down and all around. Christenson said he knew from the clues to look down. Though there were many sticks on the ground, he happened to come across a bag with the medallion in it.

At the chamber office, he asked whether he could keep the medallion. The answer he received was yes.

Christenson has lived in Albert Lea all his life, except for three years as a child in California. He didn’t participate in Big Freeze medallion hunts the past two years, but thanks to the unseasonably warm weather this winter, he did. He works as a trailer spotter at Austin Packaging Co.

He has been married to his wife, Kimberly, for 14 years. They have three sons and one daughter.

He said he plans to spend the $300 at Bergdale’s Harley-Davidson.