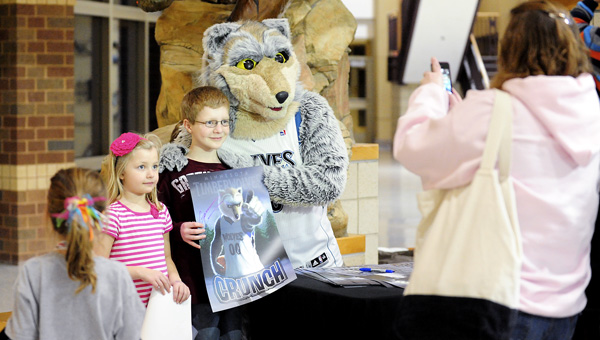 Gretta Larson, 8, and Garret Larson, 11, get their picture taken with the Timberwolves mascot Crunch on Tuesday at Albert Lea High School. Crunch autographed posters and took photos with fans. He was supposed to perform during half time of the boys' basketball game, but due to a power outage he was unable to. --Brandi Hagen/Albert Lea Tribune

While the Minnesota Timberwolves were warming up in the City of Angels, Crunch, the team’s mascot was keeping fans in Albert Lea company in the dark. 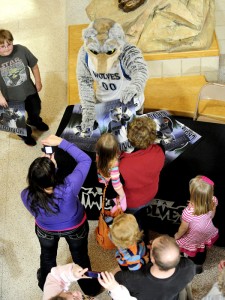 Crunch was scheduled to perform on Tuesday at halftime of the Albert Lea boys’ basketball team’s game against Waseca at Albert Lea High School but instead signed autographs and posed with fans after the game was canceled.

Downed power lines at the intersection of Bridge Avenue and Hammer Road left ALHS’s gym without lights around 6:40 p.m., just 20 minutes before tipoff.

Eager fans, many wearing Timberwolves jerseys, waited in the dark gym until 8 p.m. when the game was called. ALHS Activities Director John Double announced the game would be rescheduled and Crunch would sign autographs near the school’s office.