Elgar Arnold Thune, Jr., 77, passed away Feb. 24, 2012, at Friendship Manor Nursing Home, Shakopee. Elgar “Arnie” was born in 1934 to Ruth and Elgar Thune, Sr. in Worcester, Mass. The family lived in Chicago and St. Paul before settling in Adams. After graduating from Adams High School, Arnie joined the Army and spent time in Germany and touring Europe. Then returning from duty, he worked for Minneapolis Moline for a number of years. Arnie spent the later part of his life in Albert Lea where he worked for Streater Co. He was a machinist before retiring. 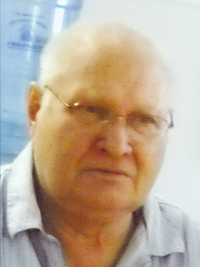 Arnie was a colorful character in Albert Lea. He enjoyed his apartment above the Eagles Club where he had wonderful neighbors. Arnold spent many hours walking or riding his red scooter around town, touring the parks, gardening, shopping, hanging out at the antique store, greeting the workers at the bank and hospital cafeteria. He enjoyed going on trips. He visited many exotic locations around the world. Arnold was a unique person, and he will be missed by many.

Survivors include sister, Barbara Panser of Owatonna; brother, Bob (Susie) Thune of Austin; two brothers-in-law; 10 nieces and nephews; and many great-nieces and great-nephews. He was preceded in death by parents, Elgar Thune Sr. and Ruth Thune; sisters: Beverly Lillquist and Lenore Dammann.

It was Arnie’s wish to be cremated. There will be a gathering to celebrate Arnie’s life at a park in Albert Lea this summer. If you would like to come, please contact Laurie 304-1935. Arrangements are with the McNearney Funeral Home, Shakopee.