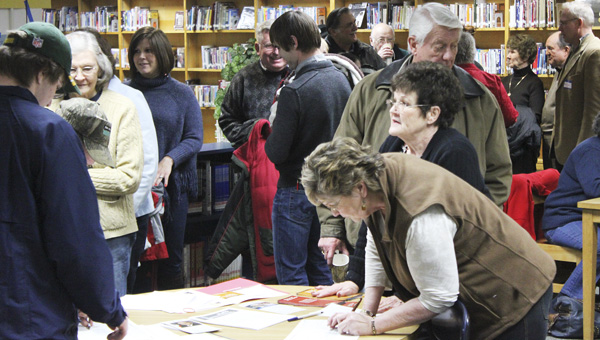 Ginny Ackland signs in to the Ward 1 caucus Tuesday in the library at Southwest Middle School. -- Tim Engstrom/Albert Lea Tribune 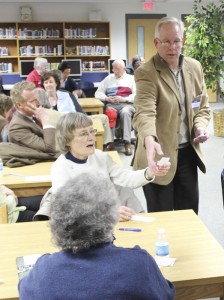 Freeborn County Republican Party Chairman Al Arends said Santorum has spent more time in Minnesota. He said Santorum is the most conservative of the four candidates and speaks often on social issues.

It was a big night for Santorum. He won the Minnesota caucuses and won the primary elections in Missouri and Colorado. He staged a comeback after lagging since his victory in Iowa and made front-runner Romney’s campaign appear to sputter.

House District 27A Rep. Rich Murray stopped to speak to caucus-goers. Republicans of Ward 1 of Albert Lea met at the school library. Murray asked them for a show of hands of people who favor public money for a professional football stadium. No one raised a hand. Then he asked if they would favor using public money to give a loan that the Minnesota Vikings would pay back. Many hands went up.

He mentioned how the state traditionally has supported arts and entertainment and said he knows how Vikings football is woven into Minnesota life. 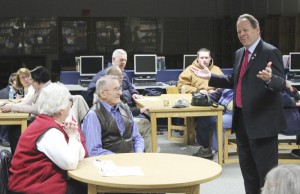 House District 27A Rep. Rich Murray smiles Tuesday when speaking to the 50 people gathered in the school library of Southwest Middle School for a Republican Party caucus. This and other GOP caucuses for Freeborn County took place throughout the school. -- Tim Engstrom/Albert Lea Tribune

“To some people,” he said, “the Vikings are their arts and entertainment.”

Murray said he disliked legislating through constitutional amendments. It pushes the role of passing laws onto the people, instead of legislators.

“We were elected to do our jobs,” he said.

At the Ward 1 caucus, the largest one, letters were read from Ron Paul, a supporter with the Mitt Romney campaign and a brochure from the Santorum campaign. 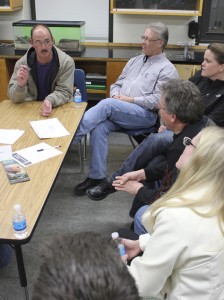 Brian Bias of Carlston Township speaks to other residents of the precinct Tuesday during a caucus in a science classroom at Southwest Middle School in Albert Lea. --Tim Engstrom/Albert Lea Tribune

Romney came out on top in Ward 2, with 12 votes. Gingrich had 6 and Paul and Santorum each had 5.

Republicans from every township and city in Freeborn County gathered to scribble names on pieces of paper. They were tallied and taken to a Freeborn County Republican Party table at the entrance to the school to be verified and added to the county total.

At the Ward 1 caucus, Kathryn Ubl proposed a platform resolution regarding global warming. The resolution called for no law based on science by the United Nations or the National Oceanic and Atmospheric Administration until they can “prove that carbon dioxide is a harmful poison to Earth’s environment.”

She said her resolution was fueled by reading a blog called democratsagainstunagenda21.com.
Before a vote was taken, Rachel Christensen stood and said environment issues are conservative issues. She said Republicans can’t let Democrats paint them as willing to destroy the environment.

“Everything about environmental protection isn’t wrong because it might cost a little more,” she said.

The resolution passed on a voice vote with two opposed and several abstaining.

No other resolutions were proposed in Ward 1 for the nine-plank Minnesota GOP platform.
Ward 1 resident April Jeppson found herself being nominated to several positions. Among them, she became the precinct chairwoman and one of 12 delegates going to the county convention.

Jeppson said she was pleased with the turnout Tuesday but wishes more would show up. She said she resided in Iowa City, Iowa, four years ago and experienced the large turnouts at the Iowa caucuses.

The Minnesota native said Minnesotans tend to be more reserved than Iowans.

“I feel like you should participate and do something to about it.”