A memorial service for Germaine “Gerry” Matthies will be held at 11:30 a.m. Tuesday at First Lutheran Church in Albert Lea, with a visitation starting at 10 a.m. The Rev. John Holt will officiate. Bonnerup Funeral Service is handling arrangements. 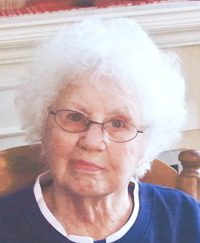 Gerry died on Friday, Feb. 10, 2012, in Wells. She was 85 years old. Gerry was born on May 23, 1926, in Albert Lea. The daughter of Gilbert and Anna Trytten, she graduated from Albert Lea High School and was a Freeborn County resident for the majority of her life. Gerry married Leslie Mattheis on Nov. 15, 1946, at the First Lutheran Church in Glenville. They shared 64 years together and raised two children. After marriage, they lived in Albert Lea before moving to a farm near Lyle, a place where family would spend many summers and holidays. After 13 years in Lyle, the couple moved back to Albert Lea.

Gerry was a very gifted seamstress. She sewed clothing, enjoyed crocheting, making Cabbage Patch Dolls for the grandkids, and sewing for the annual cancer telethon in Lyle. Her talents even won her a Nikki Sewing Machine for an outfit she made for her niece. She loved canning tomatoes and pickles, socializing, getting together to play cards with old friends, as well as participating in the church circle and Eagles Club. She was famous for her potato salad, apple pie and Swedish meatballs.

In lieu of flowers, please send donations to the Parkview Care Center in Wells for their hospice facility.