Memorial services for Gertrude Lucille Morin, of Albert Lea, will be at 11 a.m. Tuesday at Bonnerup Funeral Service. The Rev. Richard Spande will officiate. Friends may greet the family one hour prior to the service. Interment will be in St Theodore Catholic Cemetery. 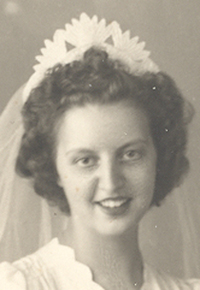 Gertrude was born Jan. 6, 1922, in Manchester, N.H., the daughter of Emile and Albina (Duquet) Beaudoin. She attended Catholic School in New Hampshire. On June 3, 1944, she was united in marriage to Oliver Morin in St. Edmonds, N.H.

Gertrude worked hard all of her life first as a welder in the Boston Shipyards then in the textile mills in Manchester, N.H. She lived in Maine for over 32 years and moved to Albert Lea in 1987. Gertrude was a member of St. Theodore Catholic Church. She ran a bait shop for a short time in Albert Lea, enjoyed fishing, gardening and flowers.

She was preceded in death by her parents; husband, Oliver, in 2004; sisters: Lorraine and Irene; and brothers Lionel and Norman.