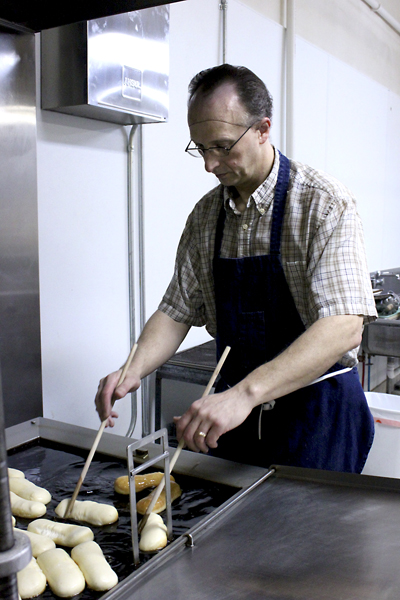 NEW RICHLAND — The smell of freshly made dough is in the air again at a bakery in this city. Chairs and tables face three bakery cases that are filled with goodies that make the mouth water. Artwork and a shadowbox decorate the bare walls. 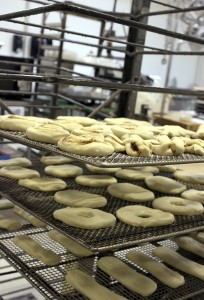 As Nancy Klecker finishes the cuttting and rolling out of cinnamon rolls, donuts, long johns and bear claws she puts them on a rack that will be put into a steamer for rising.

The back room is home to large-scale baking equipment including a mixer named Betsy, which stands almost as tall as an average person. When Betsy is mixing dough, the sound is almost as though a train is thundering by.

“It starts to get its own beat,” Nancy Jane Klecker said. “I’m sure the people can hear that next door at 4 a.m.”

Klecker is the owner of Nancy Jane’s Bakery. It is the third bakery at 118 N. Broadway Ave. since 1935. Before Klecker, it had been owned by the Quiram family and before them the Nelson family.

Klecker first opened in November 2009 and has been a busy baker ever since.

Every Tuesday through Saturday morning before sunrise Klecker, with help from her husband, Harry, and another employee, Teresa Scott, makes doughnuts, cookies, sandwiches and breads from scratch.

Klecker continues to use the Quiram’s recipe for creme-filled long johns, but the rest of the recipes come from her grandma.

Klecker wants the bakery to work the way it did in the ’70s and ’80s. Many chain stores today don’t fry doughnuts because it isn’t healthy. At Nancy Jane’s bakery, Harry’s role is to fry the doughnuts.

“That’s what makes a doughnut,” Klecker. “A doughnut isn’t supposed to be healthy. They aren’t made to eat a dozen or a half dozen every day all the time. It’s a treat.” 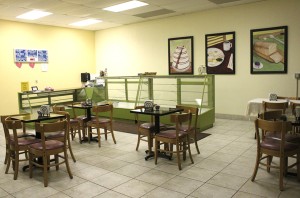 The Nancy Jane bakery in New Richland is the third bakery to be housed in the building at 118 N. Broadway Avenue. The owner, Nancy Klecker has been in business since November 2009.

Before owning her own bakery, Klecker did a lot of baking at other bakeries and in her home for the farmers market in Albert Lea.

“I grew out of my home,” Klecker said. “My oven couldn’t take it anymore. It went through two starters. I was baking so much it was unreal.”

Klecker and Scott are currently baking for the Valentine’s Day holiday. They are making heart-shaped cookies designed to look like a Valentine with words like “Be mine” drawn across them.

“We’ve already gone through tons of them just in the last week,” Klecker said. “They’re flying out of here.”

To keep the bakery running, Klecker is to work by 2:45 a.m. daily and stays at the bakery until 3 p.m. when the store closes.

“Everything we do is for the bakery,” Klecker said. “It’s the only way to keep a business going. You have to give it your all.”

She said the days get to be long and by Saturday she is ready to go home. 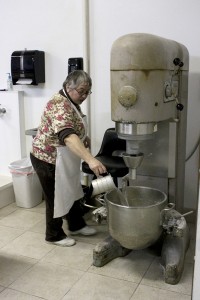 “Come Tuesday morning, I’m ready to be back in here again,” Klecker said.

Klecker said she finds it satisfying when her customers return and have encouraging feedback about her product.

“I think it’s a lost art,” Klecker said. “It does take a lot of creativity and imagination to come up with stuff.”

Speaking of art, the artwork that hangs in the cafe part was made for Klecker by her daughter-in-law, Wendy Smith. So far Smith has created three pieces; one of a wedding cake, one of coffee and doughnuts and one of a loaf of bread. She is working on the fourth and final piece, an apple pie.