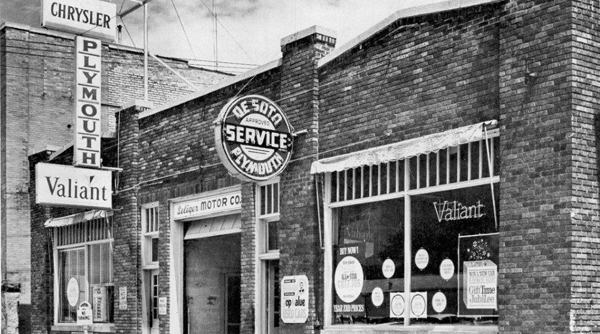 The American Legion building in 1965 was a car dealer selling and repairing automobiles by Chrysler, Plymouth, Valiant and DeSoto. -- Submitted photo

American Legion Post 56 is reaching out to Albert Lea businesses and community members to help the club climb its way out of debt.

The veterans are asking for $85,000 to go toward paying debt from its mortgage and outstanding vendor bills. Their campaign kicks off March 1 and runs through April 15.

Post 56 is coming off a few difficult months. Struggling with debt and unpaid taxes, the resignation of a commander, inventory losses, red ink and internal questions from club members, the club in January forged a new direction. The club members voted in Roger Bakken as the new commander and restructured its committees. The club also accepted the resignation of Mick Jaquette, who had concerns about the personal liability the tax situation could bring him as a club officer.

Bakken said he accepted the challenge because he was confident in plans put in place to address debt and taxes. 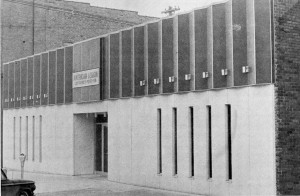 The American Legion Building in the early 1980s had a facade popular in structures from the 1960s and 1970s.

The most notable change deals with the bar, kitchen and banquet hall Post 56 runs. Bakken appointed board members to oversee inventory, product costs and profitability of the club, rather than leaving the oversight to the manager.

David Nelson, the club manager hired last July to help turn it around, remains in charge, but, to improve accountability, Legion board members will know facts when it comes to what’s happening with liquor, food and schedules, among other matters. Todd Uptadel resigned as manager last July.

The club leaders met with the accounting firm of Hammer, Dieser & Mangskau and the Albert Lea-Freeborn County Chamber Foundation to figure out how to best address the debt and taxes. Two taxes involved, according to the January 2012 newsletter, are state withholding taxes and unemployment taxes, which were not paid since the fourth quarter of 2008. The club now has to pay $1,300 per month over 18 months.

Olson said Post 56 earlier this month set up a fund through the Albert Lea-Freeborn County Chamber Foundation. People wishing to donate should send a check to the foundation at 2580 Bridge Ave. with the annotation “Legion Mortgage and Debt Reduction.” The donations are tax-deductible.

Olson, the post chaplain, said the club is looking forward primarily in two directions. The first is getting the club out of debt. The second is assuring club members the board “is not sweeping the issue under the carpet.”

He said the steps the Legion’s board have taken demonstrate its commitment not to repeat similar mistakes.

Bakken directly addressed some of the club’s mistakes in the February 2012 newsletter: “The questions that are most asked: Where did all that money go? Why didn’t the board demand profit and loss reports. Why no audits when we have them every year? Whom was at fault? What are you going to do about it? The board and myself also ask ourselves why we weren’t more demanding. We are at fault for not being more demanding.”

Arnie Mulso, the post adjutant, said none of the donations will go toward paying taxes. They will go toward mortgage and vendor debt. However, he said paying those costs will free up revenue so the club can pay taxes.

Mulso said some of the problems with the club going into red ink have to do with oversight but much of it also has to do with changing times.

He said the Legion once was flush with cash in the days when it had greater gambling revenue, more members and people spent more time at the club than today. He said the advent of casinos, dying veterans, the reluctance of young veterans to join, busier family lives and more responsible drinking habits have cut into the traffic at the club and, thus, revenue.

Tighter budgets are part of the plan going forward, Mulso said. And the club hired a new gaming manager in November, with a reception for Lyle Hinz in January.

The 56th one of its kind in Minnesota, the club has been around since 1919. Post 56 is named for sailor Leo Martin Carey, the first Freeborn County veteran to die in World War I combat. It met in the Hyde Building until 1965, when it moved to 145 N. Broadway Ave., a former car dealership. Extensive remodels occurred in the 1960s and the 1980s.

There are 921 members of Post 56, with about 600 in its auxiliary and 150 in the local Sons of the American Legion chapter. About two-thirds of the Legion members are veterans of World War II and the Korean War.

Its banquet room is the only one in downtown Albert Lea, the gathering site for service clubs, wedding receptions, pancake breakfasts and other functions. The club is a staging ground for veterans in the American Legion and in the Veterans of Foreign Wars who participate in parades, funerals and other ceremonies, often without financial support from the loved ones of the deceased for their services.

Mulso said closing is not off the table, should the campaign fail miserably. Even if the campaign is successful, the club could see further changes, such as altered hours, new menus and new approaches to get people in the door.

He said the most important reason to keep the Legion Hall active and functional is for the sake of future veterans returning from combat. They will need a place to meet and relate with other veterans.

Bakken penned a letter to potential donors, saying the community needs a strong American Legion. Part of it states: “In asking this of you, we assure you that additional oversight committees have been formed and safeguards have been put in place to prevent this from ever reoccurring.”