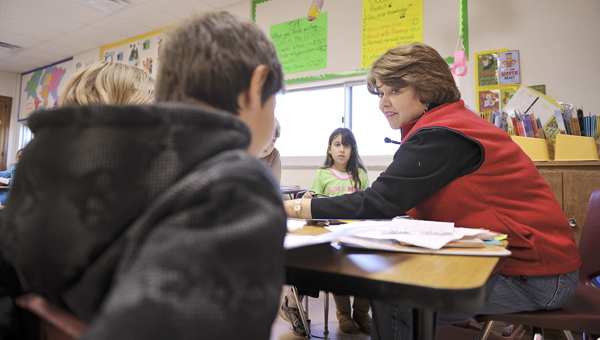 Sherry Voight, a third-grade teacher at Sumner Elementary School, waits for an answer from one of her students during class Thursday afternoon. -- Eric Johnson/Albert Lea Tribune

Local educators and legislators are watching the debate over teacher seniority this week at the state House Education Reform Committee with earnest.

At issue is a Republican-backed bill that would essentially change the way teachers are laid off by using a new evaluation system rather than tenure, or the seniority system used by many school districts.

Minnesota is one of 11 states that require districts to use seniority as the deciding factor in layoff decisions. Supporters and opponents made their cases for the first time in the House Education Reform Committee Tuesday, but no action was taken.

“What’s on the table is we need to look at what’s the right thing for the kids,” said Rep. Rich Murray, R-Albert Lea. “That’s what this is all about.”

Proponents argue seniority-based layoffs drag down student achievement because students lose effective teachers and forces more teachers to lose their jobs because districts have to let go of their least expensive teachers. Opponents counter there is no proof keeping senior teachers lowers student achievement but having experienced instructors in the classroom does indeed foster student success.

Many school districts already have measures in place for firing tenured teachers as well.

“There is a process right now in place for administrators to evaluate teachers,” said Rep. Jeanne Poppe, DFL-Austin. Poppe said the notion that firing tenured teachers is impossible is a fallacy.

Critics say teachers too often get tenure by just showing up for work — typically for three years, but sometimes less, and that once they earned it, bad teachers are almost impossible or too expensive to fire.

The latest statistics from the National Center for Education Statistics, dating to the 2007-2008 school year, show about 2 percent of teachers dismissed for poor performance, although the numbers vary widely by school district.

The analysis by the National Council on Teacher Quality, a research and policy group that seeks to improve the quality of teaching, documents the shift in laws. In 2009, no state required student performance to be central to whether a teacher is awarded tenure; today, eight states do. The analysis also says four states now want evidence that students are learning before awarding tenure.

Minnesota’s current proposal, sponsored by Rep. Branden Petersen, R-Andover, would change the teacher tenure and evaluation system by giving teachers a three-year probationary period similar to tenure and then placing them on renewable five-year contracts.

Teacher evaluations would be based on a five-point system, with 5 being the highest rating and 1 being an ineffective rating. Students’ state assessment scores would account for half of the evaluation as well. Teachers could be fired for being ineffective, though they would get 180 days to correct the reason why they were rated as ineffective.

Teachers rated as distinguished would get an annual 10 percent salary bonus as long as they keep their rating up.

In addition, the bill strips districts from firing based on seniority if a school board and teacher’s union couldn’t come to an agreement. Instead, teachers rated as ineffective in the order they were hired would be let go.

Legislators already passed a data-added teacher evaluation system as part of the education budget bill last year. Lawmakers have yet to define the evaluation system and Minnesota Department of Education officials are coming up with proposals.

“We’ve already done some tweaking, there’s already been changes made,” Poppe said. “Further recommendations may come forward from that process, but we have try something before we can say it’s not doable, not acceptable.”

In addition, Poppe questioned why state lawmakers should make decisions that she said should be in educators’ hands.

“I don’t believe it’s the role of the state representative to do that,” she said. “That’s why you have principals, superintendents and school boards.”

Teacher accountability has become a prominent educational issue over the past couple years as more school districts across the nation fail to make Adequate Yearly Progress under federal No Child Left Behind laws.

But many teachers feel under siege. They argue the evaluation systems are too dependent on standardized tests. While teachers’ unions have gotten more on board with strengthening teacher evaluations, they often question the systems’ fairness and want them designed with local teachers’ input.

Though the evaluation system put in place last year has yet to come to fruition in Minnesota, that shouldn’t discourage lawmakers from finding ways to keep public employees accountable, according to Murray.

Last year’s evaluation system is “a good first step, but we probably need to continue to tweak that and work with it to determine what’s best,” he said.