“Everything is nearly copacetic. The best things in life still belong to others. My sister Cruella is on vacation, so she left her pot-bellied pig with me. Now I have a pig in my house. I was worried about the smell, but Cruella said the pig would get used to it. I’m thinking of taking down my Christmas lights, but it’s too cold. It will be too wet in the spring and too hot in the summer. I’ll probably take them down next fall right before it’s time to put them up. You know, each year, I wish for a big fat bank account and a slim body. Each year, I get the reverse. But not this year. I have my investments — I’ve put a lot of money into duct tape. I’m exercising every day.”

“You are exercising?” I say with disbelief. “And you’re exercising daily? What are you doing, chewing your fingernails?”

“I never thought of that as exercise. That’s a good thought, but I’m doing some stuff that requires serious sweating. No more floppy fenders for me. I swim on Mondays, Wednesdays, and Fridays. I run on Tuesdays and Thursdays.”

“How long have you been doing this routine?” I ask. 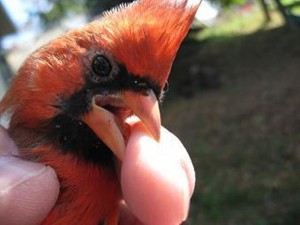 The U.S. Census Bureau began interviewing people in April 2011 for the National Survey of Fishing, Hunting, and Wildlife-Associated Recreation sponsored by the U.S. Fish and Wildlife Service. The 2006 Survey found that 87.5 million U.S. residents 16 years old and older participated in wildlife-related recreation. During that year, 30 million people fished, 12.5 million hunted and 71.1 million participated in at least one type of wildlife-watching activity such as observing, feeding or photographing wildlife.

Angry Birds has had a half billion downloads with people playing a combined 200,000 years of the game. If that time translated into actual work, the economic crisis would be over.

Texas A&M University released a survey that concluded that nature tourism, dominated by birding, brings over $300 million a year to the Rio Grande Valley economy.

Both the male and female cardinals sing. It is believed that cardinals mate for life but are known to be unfaithful. Females chose mates with the best territory and the best looks. The redder the better. Cardinals typically molt in August and September.

Solveig Erdahl said that she had no squirrels in her yard and asked if it was something that she said. Yes, it was.

“When is the mating season for raccoons?” February to March. The male raccoon travels long distances to mate with as many females as possible. After a 63-day gestation period, the female has her litter of two to six. They shelter in hollow trees or dens (woodchuck burrows, culverts, chimneys or under buildings). The young are independent at four to six months of age.

A pew for turkeys

A Lutheran church in Lafayette had problems with wild turkeys roosting on the roof of the church. It was around the time of the year when most of us are concerned with roasting turkeys. As I looked up at the big birds on their high perch, a member of the church board asked me what they could do to stop the turkeys from visiting the church. I advised them to confirm the turkeys.

Researchers tracked the migration of the Arctic tern and found that it flies an average of 44,000 miles each year on a round trip from Greenland to Antarctica. That’s a world record. This bird, which weighs less than 5 ounces, begins its year near the Arctic Circle in Greenland, where it mates, lays one to three eggs and raises its fledglings. Then it journeys southward to Antarctica where it spends the winter. The fall migration route follows the African coast, but the spring course zigzags from east Africa to northern South America, presumably to avoid counter winds. In a 30-year lifespan, it could travel up to 1.5 million miles — a distance approximately equal to 60 trips around the earth.

This from “Thinking, Fast and Slow” by Daniel Kahneman, “…being amused tends to make you smile, and smiling tends to make you feel amused. Go ahead and take a pencil, and hold it between your teeth for a few seconds with the eraser pointing to your right and the point to your left. Now hold the pencil so the point is aimed straight in front of you, by pursing your lips around the eraser end. You were probably unaware that one of these actions forced your face into a frown and the other into a smile. College students were asked to rate the humor of cartoons from Gary Larson’s The Far Side while holding a pencil in their mouth. Those who were ‘smiling’ (without any awareness of doing so) found the cartoons funnier than did those who were ‘frowning.’ In another experiment, people whose face was shaped into a frown (by squeezing their eyebrows together) reported an enhanced emotional response to upsetting pictures — starving children, people arguing, maimed accident victims.”

The Great Backyard Bird Count is a way to learn about and enjoy local birds, engage with family and friends and join thousands across the country in submitting observations. Count any birds you observe in your backyard, local park, or other location for just 15 minutes on one or more days on February 17-20 and report findings online athttp://birdcount.org. Learn more at http://www.birdsource.org/gbbc/howto.html.

“Sight is a faculty; seeing, an art.” — George Perkins Marsh