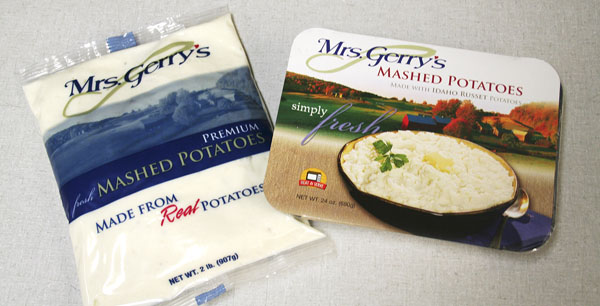 Mrs. Gerry’s Kitchen Inc. is planning to add on 36,500 square feet as a result of steady growth, especially when it comes to its mashed potatoes.

“We’re at the point where we’ve grown out of our building,” said Purchasing Manager Chad Vogt.

The company is shooting for a groundbreaking date of April 1, weather permitting.

He said the company will expand into the lot to the north of the existing Mrs. Gerry’s plant at 2110 Y.H. Hanson Ave., which has 85,000 square feet. The added space will make room for dry goods and finished goods.

The company makes 120 products, from dips and spreads to macaroni and cheese, but its line of salads and mashed potatoes continues to grow steadily each year, with particularly large increases in the sales of the mashed potatoes, Vogt said.

Why the mashed potatoes?

“The taste, the convenience, the ease,” he said.

The expansion project will result in the addition of five to 10 jobs. Mrs. Gerry’s presently employs 143 workers.

The company recognized its need to expand four years ago but held off. Now, it is a necessity, Vogt said, if the company wants to continue its growth.

“Everybody at Mrs. Gerry’s is really excited about this,” he said. “We see this as progressing into the future with our product lines and with the community.”

The company hopes to be finished with the expansion by Nov. 1.

He said the plans still are being drawn up as the company looks at designs for the addition. He declined to state the price tag.

Some of that structure came before the Albert Lea City Council on Monday night. Mrs. Gerry’s is working with the Albert Lea Economic Development Agency on finding low-interest loans.

Dan Dorman, the executive director of the Albert Lea Economic Development Agency, stood before the council on Monday as the city set a hearing for April 9 for a tax-increment-financing district. The council also set a public hearing for the same night on letting development agencies in the city use unused tax-increment-financing revenue within the city for assisting construction or rehabilitation, a tool the state is allowing temporarily under its jobs stimulus program.