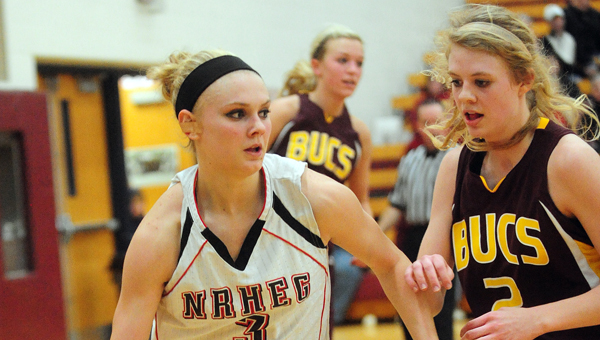 New Richland-Hartland-Ellendale-Geneva is led in scoring by sophomore Carlie Wagner, above, who averages 29 points per game. The Panthers finished its first undefeated regular season on Friday with a 45-point win over Randolph. -- Andrew Dyrdal/Albert Lea Tribune

NEW RICHLAND — New Richland-Hartland-Ellendale-Geneva’s girls’ basketball team flexed its muscle plenty this season as it outscored its opponents by an average of 30 points per contest.

The Panthers displayed its skill, ripping through its Gopher Conference schedule and scoring 70 points per game, the third most in Class AA. 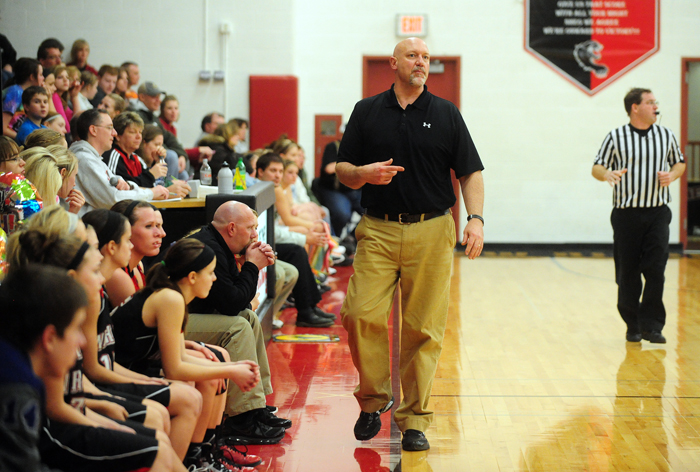 NRHEG girls' basketball coach John Schultz walks the sideline in New Richland. Schultz has coached the team's sophomore class since they were in third grade with the exception of one year.

And it proved it belonged among the top teams in the state when it beat seventh-ranked St. Peter by 27 points in late December and cruised by Goodhue, the top-ranked team in Class A, less than a month later.

But it wasn’t talent that led the Panthers to 26 straight wins and the program’s first undefeated season. It was everything else.

“Hustling and rebounding is No. 1,” said Panthers sophomore Jade Schultz. “You can win a game with just rebounding.”

Led by Division I recruit Carlie Wagner, the Panthers quickly climbed into the state rankings and up the ladder to No. 2, where it sits today after a perfect run through its regular season.

The team won its fourth consecutive Gopher championship, but isn’t satisfied. The real work begins on Feb. 28 when the Panthers open the Section 1AA Tournament, presumably as the South Subsection’s No. 1 seed.

“We really want to get to state,” said Jade, who’s currently out indefinitely with a high ankle sprain. “I don’t think anyone will be satisfied if we don’t get there.” 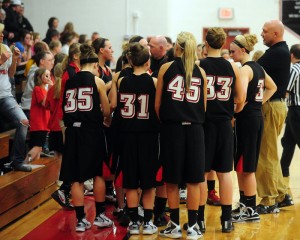 New Richland-Hartland-Ellendale-Geneva's girls' basketball team went 26-0 during the regular season this year, beating its opponents by an average of 30 points per game.

While the Panthers never won by fewer than seven points this season, it plays in one of the toughest sections in the state with other top teams, including Southland (22-2), St. Peter (21-3) and Blue Earth (17-5).

The Panthers are a clear favorite but haven’t been to state since the 2003-04 season, when Jade and Wagner were in second grade, so they’re not taking anything for granted.

“We’re pretty confident but very aware things can go downhill fast if we don’t work our butts off,” Jade said. “We’re sitting and waiting for the time to come to get after it.”

The Panthers this season returned four starters off last year’s team that finished 23-4 and lost to Blue Earth in the subsection finals. Its coach, John Schultz, calls the team “seasoned,” though it only has three seniors.

“They play with a lot of poise, and they show up at the right time,” Schultz said.

The Panthers cruised through its first 10 games, beating nine teams by at least 19 points, including the Panthers’ lone Class AAAA opponent, Bemijdi, who started the season 7-1 before losing to NRHEG by 24.

Wagner scored 27 points when the Panthers beat the Saints to win the St. Peter Tournament and was named the tournament’s MVP. She bested that performance against Goodhue, scoring a school-record 39 points at Carleton College.

The Panthers didn’t lead at halftime for the only time this season when it was tied at the break with Waterville-Elysian-Morristown on Jan. 19, but it went on to win 56-47. The team also survived its only overtime game on Jan. 24 with a seven-point win over Faribault Bethlehem Academy.

Little has surprised Schultz about this season with the exception of Wagner’s improvement from her freshman to sophomore season. He said the point guard, who is being recruited by a number of Big Ten and Big 12 basketball programs, has improved her pull-up jump shot, post up and timing around the basket.

The only knock of Wagner’s game, if you can call it one, is that she’s at times too unselfish for how talented she is. The sophomore averages 29 points per game, but is often pleaded to by her teammates to score more.

“She can take any person to the hole, she’s that good,” said Jade, who holds the Panthers’ record for most 3-pointers made in a season. “When she’s running down the floor, I tell her don’t even pass it to me. When she scores, we win and it makes our lives a lot easier.”

Wagner displayed her ability to score relentlessly on Feb. 13 when the Panthers were struggling to pull away from Blue Earth and she scored 21 straight points that led to a 16-point win.

“She likes to do it her way first and if it starts going to heck turns around and does what she’s supposed to,” Schultz said. “As games get tougher hopefully she gets after it right away.”

Schultz said he isn’t afraid to put Wagner on the bench if she isn’t shooting enough.

“He isn’t a happy camper,” said Wagner, on if she is passing too often. “I just have to say, Carlie, kick it into gear now.”

Entering the postseason, Schultz said he’s most concerned about Southland, the only top tier team that Panthers haven’t played this season. Southland is second in Class AA in scoring, but allows six more points per game than the Panthers.