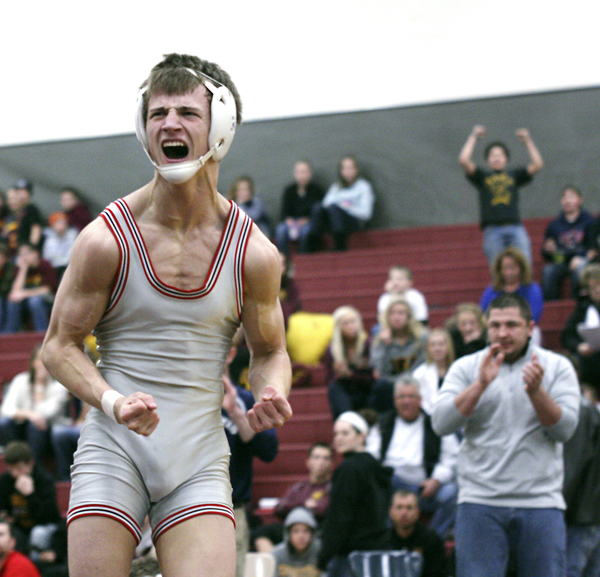 BLUE EARTH — The United South Central and New Richland-Hartland-Ellendale-Geneva wrestling teams had a combined total of 18 individuals place in the top six on Saturday during the 2A wrestling tournament in Blue Earth. 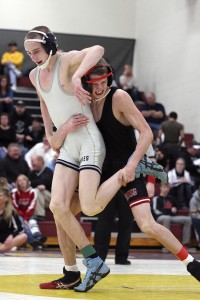 Five of those individuals were from USC and qualified for state.

“We wrestled the way we were going to,” USC coach Todd Rassmussen said. “Our goal was four guys to make it to state, and we ended up getting five. We came up short with one more, and he was almost there, too, so overall we wrestled well.”

Dylan had a bye in the first two rounds but pinned Maple River’s Zak Walters at 0:48 and won a 1-0 decision over Eliot Jurries of Jackson County Central to earn the champion title at 126.

Brady Thisius also started with two byes and pinned Maple River’s Kyle Schoneck at 0:52 to enter the final round. He secured the win after a 10-6 decision over NRHEG’s Seth Petranek.

“It feels really good to get the revenge,” Thisius said, after a loss to Petranek last year. 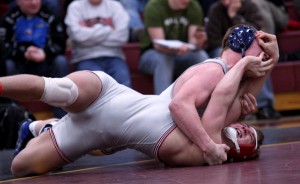 USC's Colten Carlson tries to fight off being pinned by Cooper Moore from Jackson County Central on Saturday during the individual section tournament. Moore won a 17-2 decision over Carlson.

From NRHEG, Dustin Esplan (120) was named champion and a disappointed Seth Petranek (182) was named runner up.

Esplan said he was confident going into the match and was happy with the results. He just wished more individuals would have qualified from NRHEG. Petranek said his loss to Thisius was an aggravating one.

“Certainly there’s a little bit of a rivalry and little bit of history between Thisius and Petranek,” NRHEG coach Paul Cyr said. “Last year we won, this year we didn’t. Just another week to catch up to them.”

The fight between Esplan and Blue Earth Area’s Isaac Vasquez came to an end when Vasquez was pinned at 5:02. Esplan won by a technical fall 15-0 over USC’s Jacob Gonsalez at 4:18.

“It was a decent section tournament for us,” Cyr said. “We entered 11 and placed 10. It could have been worse but it would have been nice to figure out a way to qualify another guy.”