Scarlets use 24-2 run to down Tigers 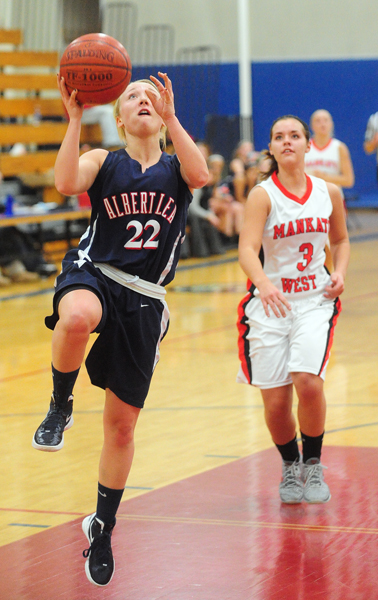 Albert Lea’s Bryn Woodside scores a layup on Tuesday during the first half of a 71-43 loss to Mankato West. -- Andrew Dyrdal/Albert Lea Tribune

Ashley Tewes knocked down her second 3-pointer of the first half on Tuesday to cap an 8-2 run and give the Albert Lea girls’ basketball team a 21-17 lead over Mankato West with four minutes remaining.

The Tigers looked poised to enter halftime with a lead but instead were held to one field goal over the next 10 minutes as the Scarlets went on a 24-2 run en route to a 71-43 win at Albert Lea High School.

Bryn Woodside scored 14 points, but the Tigers couldn’t keep up with the Scarlets, which made six of its eight 3-pointers in the second half, including three straight out of the break.

Woodside scored on a coast-to-coast layup to start the game, and Brittani Zuniga made a 15-foot jumpshot to give the Tigers a 4-0 lead before the Scarlets responded with seven straight, including the first of four 3-pointers by Kenzie Franke.

Tewes pushed the lead to four with another 3 before the Scarlets’ Malorie Veroeven hit a 3 to start the 24-2 run with 2 1/2 minutes left in the second half.

Franke made a 3-pointer out of the break, Woodside scored a layup and the Scarlets went on to score 16 unanswered points, punctuated by another deep 3 from Franke.

The Scarlets made three of its first four 3-point attempts and banked in another with 10 1/2 minutes left in the game to build a 46-27 lead.