Skunks are inactive in the cold but don’t hibernate

“Everything is nearly copacetic. Except that everything I eat goes to waist. Like I always say, ‘Life is like a jar of peanut butter.’”

“How should I know? I’m no philosopher. I quit my job at the meat locker. It was because I was a school crossing guard in the sixth grade.”

“What does that have to do with quitting your job?” I ask.

“Well, when you want to quit a job, one excuse is as good as another. When the boss hired me, he said he needed someone who was responsible. Every time anything went wrong, he said I was responsible. My boss was so cheap, he’d put only $5 of gas at a time in his car. If he died, he didn’t want to have any unused gas loafing in his car. Besides, I ate a ham processed by that locker that was so dry, I won’t be able to spit for another month.”

“I notice you’re not chewing on a cigar. Are you trying to kick the habit?” I say.

“No, I have a cold, and I don’t smoke cigars when I’m not feeling well.”

“You know,” I say, “You’d probably live longer if you were sick more often.” 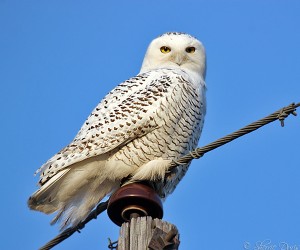 Photo of a snowy owl by Sherrie Duris.

Crows don’t care if it is the national bird

An adult bald eagle soared over our drive. Its white head and tail flashed in the sunlight. The morning was cold and quiet. I stood and watched the eagle land in a tree across the road. It had no sooner perched, than a flock of crows came storming out of our woods as if they were the cavalry coming to the rescue. The quiet morning became anything but. The crows cawed in outrage as they mobbed the eagle. The crows had formed an anti-welcome wagon.

As the skunk said when the wind changed, “It all comes back to me now.”

The smell of skunk is a sign of spring. Skunks don’t hibernate, but are inactive in cold weather. Warm spells bring them out. I saw a skunk by the deck of our house. He looked familiar. It could be argued that most skunks look alike, but this one definitely looked like one I’d seen before. I was sure that he was the skunk that I’d seen in the same spot last year. His name was B.O. I called out, “Hey, B.O., how’s it going?” He pretended not to hear me. I think he was still a little embarrassed about the big stink he’d made last spring.

“Why do I see more vultures than in the past?” As people and cars have become more numerous, so have dead animals from collisions with automobiles. This provides food for turkey vultures. Garbage and landfills provide a buffet for vultures. Circling vultures do not necessarily indicate the presence of a dead animal. They may be gaining altitude for flights or socializing.

“Why do robins take so many baths?” Robins bathe often in ponds, mud puddles, small streams, melted snow and birdbaths. I’ve watched robins wait in line to a birdbath as if they were waiting to pick up a prescription. A robin raises its feathers to allow water to reach its skin. Robins have hollow bones, making them too light to submerge. They bathe in shallow water and splash about in order to wet their backs. A robin uses its bill to preen, which removes dirt and puts feathers back in place. The robin applies oil obtained from a small gland near its tail to its feathers. This oil keeps the feathers soft and pliable. A robin takes many short baths rather than one long soak because if its feathers became saturated, the robin would have difficulty flying, making it difficult to escape predators. Bathing helps robins stay warm in winter and aids in keeping the skin free of parasites. Clean feathers are warm feathers. It they aren’t clean and in good shape, feathers don’t insulate well. Feathers that don’t perform as they are intended force a robin to burn vital energy just to stay warm.

The Oglala Lakota believed that the snowy owl represented the north wind. Warriors who excelled in combat wore a cap of owl feathers to symbolize their bravery.

Its origin is shrouded in the past, but it’s believed that the tumbleweed was introduced to the United States in contaminated flax seed. Tumbleweed, Russian thistle, tumbling thistle and wind witch are common names for this symbol of the American west. It has little if any practical use. The young shoots can serve as food for horses, sheep and cattle, but they will eat them only in the absence of anything better. Livestock did feed on tumbleweeds during the Dust Bowl years. As it rolls down a road like a plant with wheels, Russian thistle plants disperse seeds, which typically number 50,000 per plant. Its ability to tumble with the wind helped the Sons of the Pioneers to make the song Tumbling Tumbleweeds popular in the 1940s. The tumbleweed is a native of the steppe terrain of Russia. It has become pervasive as an exotic weed that grows in dry or abandoned fields, overgrazed pastures and waste areas. Kochia is sometimes mistaken for Russian thistle.

Iron-gall ink is an important ink in Western history. Leonardo da Vinci wrote his notes using iron-gall ink. Bach composed with it. Rembrandt and Van Gogh drew with it. The Constitution of the United States was written with it. Some ancient scrolls were written in carbon ink (the first writing ink), which was made by burning oil or tar to produce soot. To make iron-gall ink, galls from oak trees were crushed to obtain gallotannic acid that was mixed with water.

“Optimism is the faith that leads to achievement. Nothing can be done without hope and confidence.” — Helen Keller

“It is a wholesome and necessary thing for us to turn again to the earth and in the contemplation of her beauties to know of wonder and humility.” — Rachel Carson”