The Best of Ed Part 4 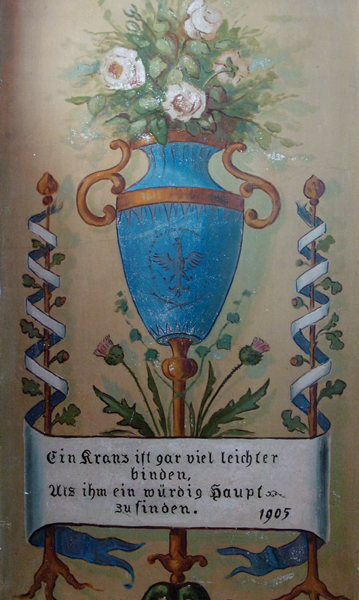 This painting by a now unknown German-American workman was created on a quiet Sunday afternoon in 1905 for Henry Wittmer. It was located at a home in rural Alden before being relocated to the Freeborn County Historical Museum.

Editor’s note: This is the fourth in a four-part series featuring Ed Shannon’s best Lifestyles stories. This was originally published Dec. 9, 2007. Ed did a follow-up story after the home that was housing the mural was almost destroyed by a tornado on June 17, 2010. The mural is now at the Freeborn County Historical Museum.

One of the area’s most unusual artistic legacies is still very visible in the rural home of Kevin and Barbara Marshall, located between Albert Lea and Alden and several miles northeast of Conger.

For 102 years, members of the Wittmer family and other people have been looking at a painting or mural which is located on a wall above the stairway to this home’s second floor. The best view of the unique artwork comes when one descends the steps and can look directly at the painting situated in a small alcove over the first floor doorway. 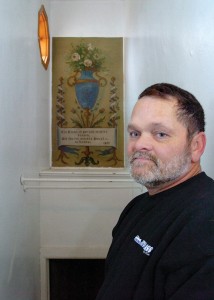 Kevin Marshall shows where the painting was located in an alcove above the stairway in his home before a tornado in June 2010 damaged the home.

According to Wittmer family tradition, the painting was created by one of the craftsmen hired to work on an addition to the farm home in 1905.

The worker, who turned out to be more than just a house painter, didn’t have anything to do on a quiet Sunday afternoon and reportedly asked Henry Wittmer if he could add a personal touch to an odd corner of the new portion in the pioneer home.

Henry Wittmer (1857-1939) was born and grew up in Kohlgrund, Waldeck, Germany. He came to Freeborn County in 1872 and returned to his original home in central Germany during 1879. In March 1880 he came back to the U.S. and persuaded 42 other relatives and friends to join him on the return trip. As a result, many people in this area can now trace part or all of their ancestry to this group of immigrants traveling from Germany to Minnesota nearly 13 decades ago.

In the 1880s Henry Wittmer had the home on what is now 680th Avenue built. In 1905, he decided to expand the residence with an addition on the north side.

In that era, the custom was for the carpenters and painters to stay on the job until the project was completed.

Thus, this group of craftsmen slept and ate at the Wittmer home, where German was then the predominate language until the addition to the home was completed. And that’s when a member of the crew painted the artistic creation which is still part of this home’s interior.

The now-unknown artist didn’t sign the three-by-five-foot mural. His artistic creation shows a tall vase of roses with thistles at the base. A German eagle design decorates this vase. On each side of the vase is a fancy stand.

Across the bottom is a banner with a German language legend based on either a part of a poem or folk saying.

The late Marvin Wittmer, Henry’s grandson, who grew up in a German-speaking household during the 1930s, explained in a 1988 Tribune interview that the wording says:

“A bouquet of flowers is easy to bind, but one who is suited to have them is hard to find.”

The home place for this German-American family went from Henry Wittmer to his son John and on to John’s son, Marvin. All during those years it was the family’s tradition to never paint over the small mural painted directly onto a plastered wall in 1905.

In May 1992, Marvin Wittmer sold the farm. In the following years this rural home has had several owners. Yet, through those years the painting has been undisturbed.

The Marshalls purchased the property in August 2000.

Kevin Marshall said that on several occasions, descendants of the Wittmer families have come to the home and asked if they could see the historic painting. He explained that this is something which is worth a favorable response. Also, Kevin Marshall said he feels this painting deserves to be preserved.

Those who see this artistic legacy will notice there’s a window next to the painting or mural, but its location on the north side of the home has prevented sunlight from causing the artwork to fade. The different hues of blues and greens are still very visible and there has been very little flaking damage to the painting during the past 102 years.