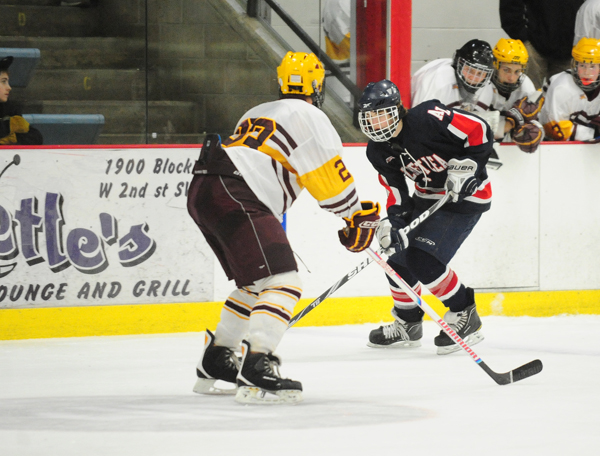 The Albert Lea boys’ hockey team lost to Northfield 5-1 on Saturday during the Section 1A semifinals in Rochester. -- Andrew Dyrdal/Albert Lea Tribune

ROCHESTER — After losing seven of its final nine regular season games, the Albert Lea boys’ hockey team on Saturday suddenly found itself one win away from the Section 1A finals for the first time since 2007.

That year, the Tigers beat New Ulm 7-1 and went on to place sixth at the state tournament, but it won’t have a shot at state this season. Northfield scored five unanswered goals to eliminate the Tigers 5-1 in the semifinals at the Rochester Recreation Center.

The seventh-seeded Tigers, which upset No. 2 New Prague on Thursday to reach the finals, skated out to a 1-0 lead after senior Levi Hacker scored a power-play goal 12 minutes and 44 seconds into the first period.

Josh Martin and Cody Haaland assisted on the goal, but the Tigers’ lead didn’t last long. The Raiders’ Andrew Scofield scored the first of his three goals less than four minutes later to tie the game on a power play after Albert Lea’s Lucas Peterson was cited for tripping.

Northfield’s Colton Woodruff lifted the Raiders to a two-goal lead 6:03 into the second, and Scofield scored his second goal at 10:20.

Scofield netted his hat trick 1:30 into the third period, and Logan VonRuden scored a power-play goal at 8:07 to make it a 5-1 final.