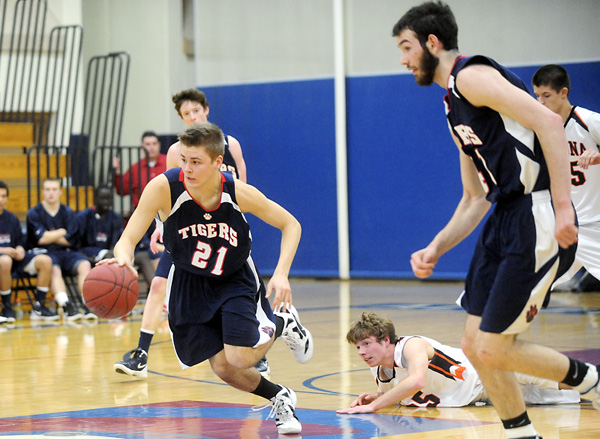 Four players scored in the double digits for the Albert Lea boys’ basketball team en route to a 68-61 win over Winona on Friday.

The Winhawks were leading the back-and-forth battle down the court 21-18 until the Tigers went on a 10-point run with four minutes remaining at Albert Lea High School. To close the half, Wichmann scored a 3-pointer with 11 seconds remaining leaving the Tigers with a 28-21 lead.

“In the second half, I thought we came out really well off the ball,” Tigers coach Lucas Kreuscher said. “We did some good cutting offensively and I thought that everybody that played, played really well. It’s probably the most that everybody has contributed in a long time.” 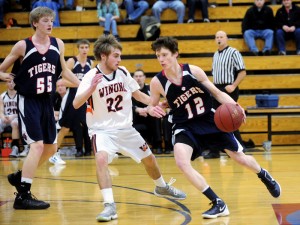 The Tigers had earned a 12-point lead within the first four minutes of the second. Over the next three minutes, Winona shortened the lead to just six points. After two free throws and a basket by Ooms and a 3-pointer by Templeman, the Tigers regained a 13-point lead.

The Tigers were able to hold Winona off by at least five points for the remaining 10 minutes of the game.

Kreuscher said the Tigers were getting the stops they needed to keep the win, but Winona’s Will Leaf made up a lot of ground after making a total of six 3-pointers.

“They’re a good team,” Kreuscher said. “But, I thought we executed a little bit better. We’ve practiced a lot on how to close out or how to come from behind. We work on a lot of situations, so they’re just growing as a team.”

Kreuscher said the win was a big one because a lot of teams are around the same spots in the section. He believes the Tigers are facing a seed between the fourth and sixth spot, but realistically the fifth.