Tigers to send elite 8 to state 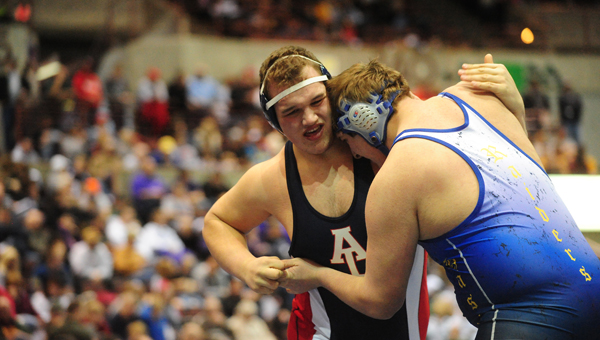 Albert Lea's Bryce DeBoer, right, was one of eight Tigers wrestlers to qualify for the state tournament. -- Andrew Dyrdal

ROCHESTER – With newcomer Hastings this season added to the Section 1AAA mix, its individual tournament that for years was a two-team slugfest became a three-team dance.

When the mats were rolled up on Saturday, it was Albert Lea that had the sweetest moves.

Despite the addition of the second-ranked Raiders, which denied Albert Lea or Owatonna a section team title for the first time since 1994, the Tigers qualified eight wrestlers to state, just one fewer than last season and the most of any team in the section.

The Tigers crowned five as section champs and three were runners-up at the Rochester Civic Center, and only two teams in Class AAA (Apple Valley 13, St. Michael-Albertville 9) are sending more individuals to the state tournament held March 2-3 at the Xcel Energy Center in St. Paul.

“We had a great weekend,” Tigers coach Larry Goodnature said. “The kids wrestled their hearts out and were very physical, intense and tenacious.”

While the Tigers, Raiders and Huskies combined for 20 of the section’s 28 state-bound wrestlers, Hastings added much more depth to a section desperate for parity, especially last season after two teams combined for 21 state entrants.

Goodnature called Section 1AAA the second-toughest in the state for individuals behind 7AAA, which is home to four ranked teams, and is in favor of the added competition.

“I don’t mind the competition at all,” he said. “It makes for a better section to represent up at the state tournament, and I think our section will do very well up there.”

The Tigers received the section’s most No. 1 and 2 seeds and had each of them reach the finals, led by its top-ranked junior, Trevor Westerlund.

Westerlund won a 20-9 major decision to reach a finals matchup with Owatonna’s wunderkind Brandon Moen. Westerlund was pinned by the Huskies’ seventh-grader in their meeting on Dec. 15, 2010, but won the rematch in the section team finals and rolled to a 16-7 win on Saturday.

Garrett Wangsness followed with an 3-2 upset of top-seeded and fourth-ranked Luke Rowh, of Hastings, in the 113-pound finals. Wangsness trailed 2-0 after the first period but scored a takedown in the second and an escape in the third to win.

Dakota Wangsness fell to Evan Green at 120 pounds, and top-seeded Hansen beat Faribault’s Brandon Peters, who’s ranked No. 10 at 120 pounds but moved up a weight class for a better chance at state, at 126 pounds.

Triston Westerlund was tied 5-5 with Rochester John Marshall’s Tim Moore in the second period when he suffered a right shoulder separation and defaulted due to injury.

Dalton Westerlund scored his third pin of the tournament when he beat Hastings’ Bryan Rachuy in two minutes and 55 seconds, and the No. 2-ranked Hable notched an impressive 8-2 win over No. 4 Jordan Zeman, of Owatonna.

Tigers’ heavyweight DeBoer beat Hastings’ Jake Anderson is 1:50 before being pinned in 1:37 to Owatonna’s Spencer Sorenson in the finals.

While the Big Nine Conference champion Tigers aren’t headed to state as a team, Goodnature said that will give its wrestlers more time to relax and think about the individual tournament.

“I don’t think it will be as stressful on them,” Goodnature said. “When you go up there as a team there’s more ups and down and juggling kids around. Now they’ll be able to kick back that first day and get ready for individuals.”