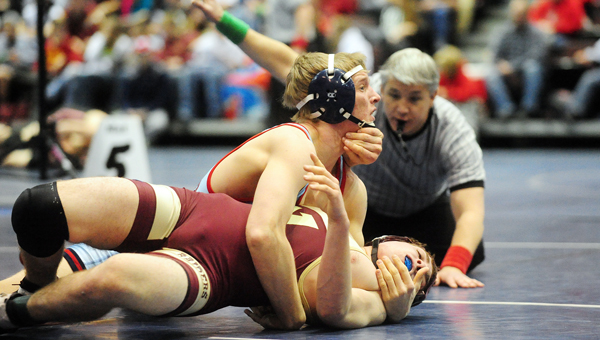 ROCHESTER — The Albert Lea wrestling team on Friday advanced nine wrestlers to the semifinals of the Section 1AAA individual tournament’s at the Rochester Civic Center.

Less than a week after falling to Owatonna in the team semifinals, the Tigers were well represented atop the individual brackets, receiving five No. 1 seeds and three No. 2s. It took advantage, sending all eight within a win of the finals, along with fourth-seeded Dustin Samudio.

No. 1-ranked and top-seeded Trevor Westerlund was the lone Tiger to wrestle two matches and beat Winona’s Tristan Drazkowski 18-2 by technical fall and pinned Faribault’s Josh Amacher at 106 pounds.

The Tigers’ Lucas Hansen received a top seed at 126 pounds and won a 14-2 decision over Hastin’s Jake Spitzack.

Devin Nelson (132) was the first Tiger to lose, falling 5-2 to Rochester Mayo’s Brady Nelson in the quarterfinals. Nelson tied the match at 2-2 during the third period, but the Spartan notched back points late and held on to win.

Derick Samudio (138) was pinned by Northfield’s Adam Woitalla in the quarterfinals and eliminated by Faribault’s Trevor Morris in the wrestlebacks.

Albert Lea’s third-seeded Brody Sundbald lost the biggest upset on Friday when he was edged 6-4 by Northfield’s Sam Olson in the quarterfinals on a takedown with 30 seconds left. Sundblad then pinned Winona’s Chris Wisted in the wrestlebacks.

At 195 pounds, Jace Talamantes was pinned by Mayo’s second seed Justin Carr in 3:09 before pinning Rochester Century’s Daniel Lopez in the wrestlebacks.