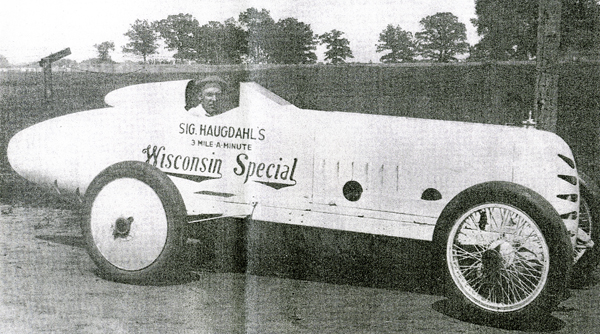 This photo of Sig Haughdahl likely was taken in 1922 after he became the first person in history to drive an automobile three miles a minute. He did it at Daytona Beach, Fla. It was this very same car, partially constructed in Albert Lea over 80 years ago, that was sold at an auction in Hershey, Pa., in October 2002.--Photo courtesy of the Freeborn County Historical Museum

Editor’s note: Because of recent letters to the editor inquiring about the Wisconsin Special race car, the Tribune is publishing this story again. It first appeared in the Tribune on Dec. 29, 2002.

What could be one of the nation’s oldest racing cars was recently sold at an auction in Hershey, Pa. This is the “Wisconsin Special” vehicle used by Sigurd “Sig” Haugdahl, a former Albert Lea resident, to set a world record for driving three-miles-a-minute just 80 years ago.

Sig Haugdahl was born in Norway on Jan. 10, 1891, and came to Freeborn County in 1905 to live with an uncle near Albert Lea. He started out as a motorcycle racer and switched to automobile racing about 1914. Sig became a mechanic and machinist and operated a small car repair shop called the Auto Hospital near the city’s present post office location.

The man who became known as the “Norwegian Speed Demon” participated in car racing events at fairgrounds and outdoor dirt tracks all over the Midwest. Then he started going to Daytona Beach, Fla., during the winter months to continue racing and to become involved in a real speed challenge.

In the early 1920s, Haugdahl created a special vehicle for racing purposes. It was assembled in part at his Albert Lea garage. The name of Wisconsin Special, incidentally, is based on the 250-horsepower, six-cylinder Wisconsin brand aircraft engine under the hood.

The catalog description for auction said, “Haugdahl, a brave and resourceful driver who had also engineered amazingly sophisticated for its time, …. (The) Wisconsin Special applied rather more ice than brute force and ignorance to the problems of ultimate straight-line speed. It featured minimal frontal area, thoughtful streamlining, and careful attention to reducing aerodynamic drag.” And as an added note, this auction catalog pointed out that Sig was an early advocate for the need to balance automobile wheels carefully.

On April 7, 1922, Haugdahl drove his Wisconsin Special over a measured mile on the beach at Daytona Beach. He attained a speed of 180.3 miles an hour to meet the three-miles-a-minute challenge and set a new world’s automobile speed record which was to hold for five years.

However, Haugdahl’s record run at Daytona Beach 80 years ago was never officially recognized and became the basis for controversy. The Fall 1964 issue of Automobile Quarterly Magazine said his drive was not recognized by the Contest Board of the American Automobile Association because it was made in a one-way dash instead of a two-way run. (His record drive was timed and observed by several reliable people.) This record drive “was not timed by an official,” according to the magazine. Haugdahl was then considered to be one of “outlaw” dirt track drivers who followed their own set of rules.

Information from the Bonhams firm, sponsors of the auction, says the Wisconsin Special car was taken by Haugdahl “on a lengthy nationwide tour of state fairs and minor race tracks around the USA.”

Another bit of information about this car from Bonhams says Haugdahl’s vehicle was partly sponsored by J. Alex Sloan of Joliet, Ill., a colorful character who managed the speed sports activities of Haugdahl, plus those of the legendary and famous Barney Oldfield.

According to auto racing historian Doug Nye, Haugdahl and Sloan had a disagreement later in the 1920s and Sloan took possession of the Wisconsin Special.

Partial proof of this can be seen in photos from the early 1930s that show Haugdahl driving a different racing car at the Minnesota State Fair and the Freeborn County Fair (Aug. 29, 1931).

After World War II, the historic car was acquired by leading American automobile collector Cameron Beck in Chicago and later transferred to Gene Zimmerman, who preserved it in a museum in Harrisburg, Pa., before relocating with the car to Fort Lauderdale, Fla.

David V. Uihiein then purchased the car. He said, “It has never been hurt in any way, it was just old. We had to put fresh tires on it and we added a self starter, but it was in pretty good order and it’s still like that today. It’s never really been at all extensively restored.”

Uihiein is likely the person who arranged for this car to be part of the auction.

The catalog description from Bonhams says, “Over the course of a lifetime (80-plus years) and a racing career, most competitors are crashed and modified and rebuilt. However, the Wisconsin Special has never been modified, disassembled, or restored to any degree.”

This famous car was one of 29 vehicles sold at Bonhams Automobile & Automobilia Auction in Hershey, Pa., on Oct. 11, 2002. According to the Old Cars publication of Iola, Wis., the Wisconsin Special sold for $112,000. This was the second highest sale that day; the top seller was a 1967 Toyota 2000 GT coupe, which sold for $ 115,000. The names of the purchasers were not listed. Where the Wisconsin Special will actually end up is still unknown.