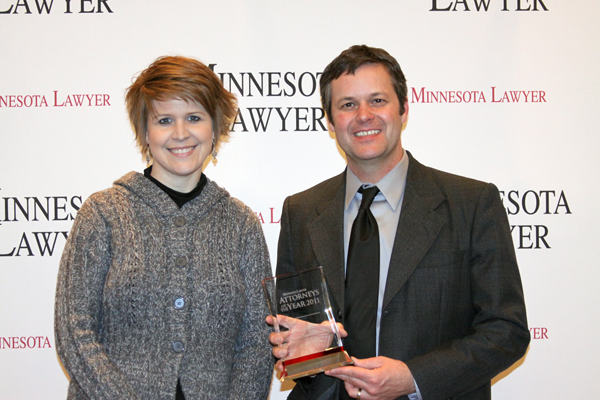 An Albert Lea lawyer has been named as an Attorney of the Year for 2011 in the legal publication Minnesota Lawyer.

“When I first got notice, I was very surprised and humbled,” said Benda. “For any attorney from Greater Minnesota to be recognized is a big deal.”

Benda is one of about 25 lawyers chosen from across the state for the recognition. The lawyers were awarded at a ceremony in Minneapolis the last week in February.

Benda, a southern Minnesota native, graduated from the University of Minnesota in 1992 and Drake University Law School in Des Moines in 1996.

He has represented farmers, small businesses and both the Shell Rock River and Cedar River watershed districts, among other clients during his time as a lawyer.

He was nominated for the award by some of his clients and his peers.

“Matt is very enthusiastic and passionate about his role as our corporate attorney,” said one client, Tom Wozney, president of the John Deere dealership, SEMA Equipment Inc. “He always makes us aware of our options and potential outcomes.”

According to a news release, Nordby said Benda facilitated a rules drafting process that solicited feedback from the community and tapped the technical expertise available within the district.

The news release states the Attorney of the Year awards were given based on public service, leadership in the profession, involvement in major cases or other newsworthy events, and excellence in corporate or transactional services and public service.