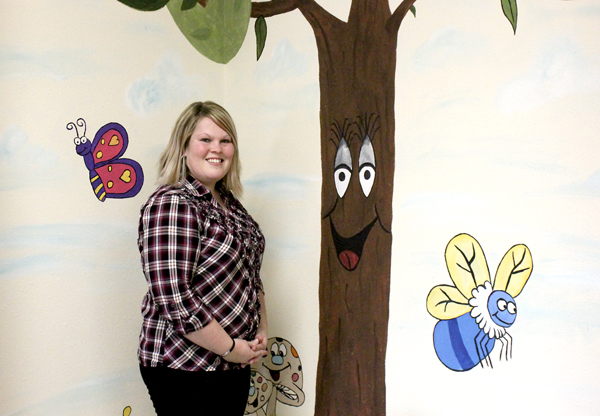 Rachel Lawson stands in front of a mural she painted in the Emmons Community Library in 2010. -- Brandi Hagen/Albert Lea Tribune

EMMONS — In 2002, Rachel Lawson started working for Albert Lea Paint & Glass Company. As a senior in high school, the job fulfilled Lawson’s love for art and drawing, but not as much as she wanted.

After high school Lawson took an online interior decorating course and continued working at the paint store. In 2008, she decided painting was something she wanted to pursue as a career and she started her own business, Rachel’s Interiors.

When Extreme Makeover: Home Edition visited Hayward in October of 2008 to makeover the home of Dirk and Susan DeVries, Lawson volunteered her time painting.

Lawson said it was there that the kitchen countertops caught her attention. Several months after the makeover, Lawson’s mother informed her that the countertops were done by Granicrete. After learning more about the product, Lawson took an installation class and became certified in Granicrete to help expand her business.

“With the way it’s evolved, it’s a blessing,” Lawson said. “I feel like it’s what I’m supposed to do. I want to make it work because I can’t see myself sitting in an office.”

She said being able to tie in decorating, painting and Granicrete work is what makes her job fun and she likes a good challenge.

“I really like to have something where I can let my creativity come out,” Lawson said. “I can usually look at something and know what I need to do to get there.”

Lawson said she values the opportunity to personalize someone’s space and it’s what keeps her doing it.

Besides the DeVries home, Lawson has voluntarily done painting at her church, Silver Lake Lutheran, and in the Emmons Community Library.

Her Granicrete work was recently recognized in a January issue of Womeninc, a magazine directed toward women that was started in 2004.

Lawson said she and her husband Chris have talked about moving their family of five to Michigan to start business there.

She said even though she has paint skills in addition to her Granicrete work, there are becoming too many installers in the southern Minnesota area to really be successful.

Besides, she noted that being by Lake Superior there tends to be a focus on rocks, stones and agates and she would like to be able to incorporate it into her work.