Funeral services for Donald Duane Edwin will be at 1:30 p.m. Wednesday at Trinity Lutheran Church. The Rev. Curtis Zieske will officiate. Interment will be at Alden Cemetery with military honors accorded by local servicemen’s organizations. Visitation will be from 5 to 7 p.m. Tuesday at Bayview/Freeborn Funeral Home and one hour prior to the service at the church. To sign the guestbook go to www.bayviewfuneral.com. 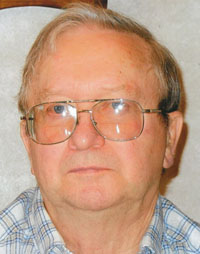 Donald Duane Edwin was born Dec. 1, 1930, to Henry and Emma (Solum) Edwin in Albert Lea. He grew up in Albert Lea and graduated from Freeborn School. After school Don enlisted in the United States Air Force where he was a jet engine mechanic specialist serving in the Korean War. Donald then attended Winona Technical School for draftsman. On Feb. 3, 1969, Donald was united in marriage to Fern Moore at Trinity Lutheran Church in Albert Lea. He was a franchise owner of Roto Rooter for 25 years. Don was a member of Trinity Lutheran Church, Eagles, Elks and the V.F.W. where he was a past commander and chaplain. His favorite hobbies were bird watching, gardening and enjoying nature, but most of all he enjoyed his time spent with family and friends.

Donald was preceded in death by his parents; brother, Howard; and sisters, LaVonne, Dolores, Verna, Ramona, Lorraine and Elaine.

Memorials are preferred to Trinity Lutheran Church, the memory unit at St. John’s or Thorne Crest or the Minneapolis VA Hospital.