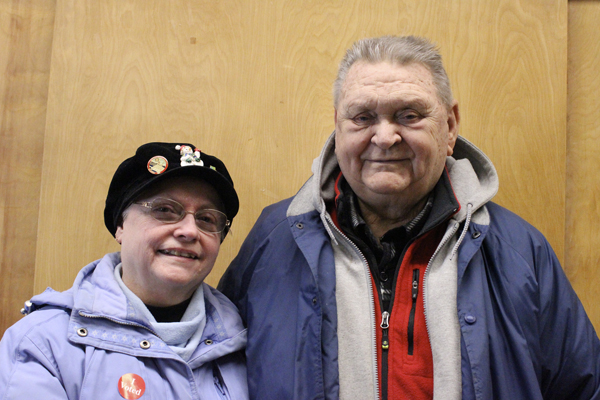 The Andersons had their photo taken at the Tribune office in January 2011. -- Tim Engstrom/Albert Lea Tribune

After more than two decades leading the Freeborn County Democratic-Farmer-Labor Party, Art and Rose Anderson are hanging up their hats.

Art, 80, agreed to be chairman 25 years ago. Rose, who turns 74 next month, began as co-chairwoman 23 years ago. Year after year, they stayed on. The duo will retire from the positions on April 19, the next DFL Party meeting. They announced their intention to retire Sunday at the Freeborn County DFL Party Convention.

Former District 27A Rep. Robin Brown, a teacher at Albert Lea High School, will be the new chairwoman.

Brown said she wants to concentrate on party building this year by getting more young people involved at the county level of the DFL Party. She said she will promote communication within the party and with the local media, in addition to delegating aspects of party work.

“I want to encourage more people to get involved so their voices can be heard,” she said.

Art said prior to him becoming the chairman the position changed hands every few years. He said initially he was nominated and agreed to do the volunteer job because the person before him didn’t want to do it anymore. He said he continued in the position because he “wanted to make sure it kept going.”

He said having Rose by his side made the job better because they could be together. The two are almost always together.

One of their favorite moments, they said, was in 2008 when Barack Obama was elected president. They went to the Democratic Party convention in Denver and to the inauguration in Washington.

Another favorite moment came in 2006, when Brown defeated lawyer Matt Benda to wrest the local Minnesota House of Representatives seat away from the Republicans for the first time in 46 years.

Art and Rose Anderson still have work to do within the DFL Party. They will lead District 27A’s endorsing convention on April 29 at the Union Center in Albert Lea. There are two DFL candidates considering runs against incumbent Republican Rich Murray, who defeated Brown in 2010. The two candidates are Shannon Savick, the former mayor of Wells, and William Wagner, a Geneva resident.

And Rose is a delegate for the state DFL convention. Art is an alternate.

Otherwise, the Andersons intend to take it easy, they said. Art wants to go fishing with the grandkids. Rose is taking embroidery classes and wants to make embroidered quilts.

They still will follow politics, they said, and aren’t happy with what they see.

“That’s one reason why we wanted to get out,” Art said. “What’s happening to our country? It isn’t good anymore.”