AUSTIN — An Austin man who beat his 12-year-old daughter in the face and legs with a belt was sentenced to 21 months in prison Thursday. 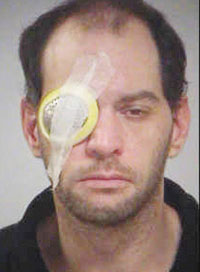 Christopher Craig Siverly, 33, pleaded guilty in December in Mower County District Court to malicious punishment of a child — a felony — in exchange for dismissal of one other domestic assault charge.

Siverly was previously sentenced to 18 months in prison for a probation violation in connection to the incident. His 21-month sentence will run concurrent with the 18 months, according to court documents.

In court, Siverly testified to hitting his daughter with a belt. He said he struck her with the belt twice and is not sure if the buckle hit her in the face. According to court documents, the girl was bleeding near her mouth when a Mower County sheriff’s deputy responded.

“I just swung and I don’t know where exactly,” Siverly testified. “I was disoriented at the time. I have no sense of depth perception with missing one eye.”

Siverly has previous domestic assault convictions, according to court documents. In February, he was convicted of violating a domestic abuse no contact order.