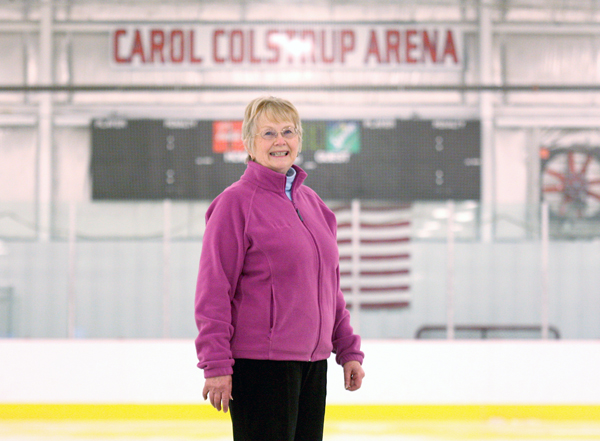 Brandi Hagen/Albert Lea Tribune Carol Colstrup stands in the arena that was recently renamed in her honor. Colstrup founded the Albert Lea Figure Skating Club and was a coach for more than 50 years.

On March 5, the ice rink formerly known as the Red Arena at the Albert Lea City Arena, was dedicated and renamed in her honor. It is now the Carol Colstrup Arena.

Colstrup retired from coaching last year but continues to skate for fun with her children and grandchildren. The passion Colstrup and her husband, Dennis, have for skating became a lifestyle that they passed on to their five children, who also became coaches for hockey and figure skating.

Colstrup said her first pair of skates were so big on her she had to wear her shoes inside of them and then tie a belt around them.

Colstrup met her husband of more than 50 years while skating at Morin Park when they were just 13-years-old.

“We used to take each others hats and scarves and chase each other,” Colstrup said.

Dennis played on the Rangers hockey team and instead of just watching when he played with his friends, she joined in.

At age 21, Colstrup decided she wanted to take figure skating lessons. Colstrup was among 140 kids that showed up for a lesson in the makeshift rink in the judging arena at the Freeborn County Fairgrounds.

Due to injury of another instructor, Chet Leusman, who at the time was 76-years-old, was overwhelmed with the thought of having so many students to teach.

He asked Colstrup if she could do a figure 8. Since she had first started learning how to skate when she was three years old, she showed him she could and he asked for her help.

“I didn’t know what to do so I just watched what Mr. Leusman was doing and would teach the same thing he was teaching to the best of my knowledge,” Colstrup said.

Leusman skated in his last show when he was 96-years-old.

Colstrup enjoyed figure skating so much she traveled to Rochester to learn from triple gold medalist, Carol Shulmann.

“It was more than lessons,” Colstrup said. “It was mentoring. She knew I was coaching so she would teach me to coach as she was teaching me.”

When she wasn’t on the ice, Colstrup studied books and videos to learn as much about figure skating as she could.

“It wasn’t work,” Colstrup said. “It’s always been fun. It’s taught me a lot about life too.”

Colstrup, who said she has felt like a second mother to many skaters is honored that parents trust her with their children.

“I never ever dreamed that I would be teaching skating all these years,” Colstrup said. “I would try to do other things. I would go to school, try different kinds of jobs, but I always ended up quitting and figure skating took a precedence in my life.”

Colstrup said she wants to thank the figure skating club and the local community and businesses for their support over the years because without them she doesn’t think she could have accomplished what she has.