Funeral services for Clarence M. Iverson of Albert Lea will be held at 10 a.m. Friday at Our Savior’s Lutheran Church, Albert Lea. The Rev. Wayne Halvorson and Rev. James Kassera will officiate. Interment will be in Oakland Cemetery, rural Albert Lea. Visitation will be from 4 to 7 p.m. today at Bonnerup Funeral Service, Albert Lea, and one hour before the service at the church. 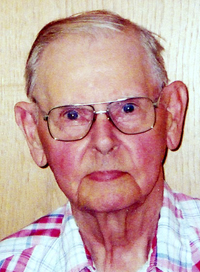 Clarence died peacefully on Tuesday, March 27, 2012, at the Mayo Clnic Health System in Albert Lea. He was 91 years of age.

Clarence was born on March 5, 1921, in Albert Lea the son of Mikkel and Alma (Lee) Iverson. He attended rural schools and then as a young man began working on various area farms. He served the country in the United States Army from October of 1942, until his honorable discharge in December of 1945. Clarence was united in marriage to Alice Hendrickson on Sept. 18, 1948, at Our Savior’s Lutheran Church.

Clarence had worked at Enderes Tool in Albert Lea for more than 40 years before retiring in 1985.

He was a member of Our Savior’s Lutheran Church, the American Legion and the VFW He was an avid reader and enjoyed watching MSNBC to keep up with current events.

He was preceded in death by his parents; his wife Alice; two sisters: Marvel Hanson and Agnes Hendrickson.