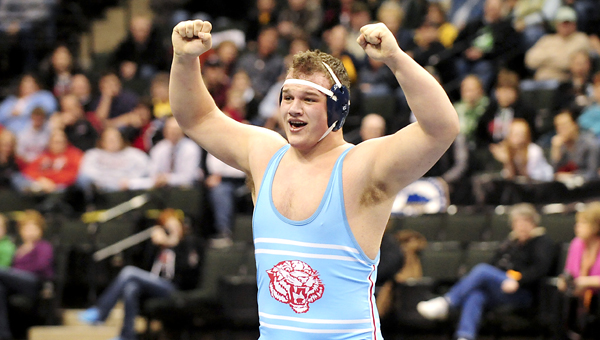 ST. PAUL — Bryce DeBoer wrestled his first varsity match less than three months ago. On Saturday he wrestled his last — as a state champion.

Albert Lea’s senior heavyweight achieved the unthinkable when he pinned Champlin Park’s Gjullian Flemister King in the second period of the Class AAA state finals at the Xcel Energy Center in St. Paul.

The Tigers’ first champion since 2006 raised his arms in front of 18,000 fans who were unaware that DeBoer had just wrapped up his first and only season as a varsity wrestler.

After celebrating by hugging heavyweight coach Ryan Palmer, who turned DeBoer from a raw talent, who knew only the basic rules of wrestling, into a state champion, the senior fell to the floor in the arena’s lower corridor and sobbed.

He was then mobbed by teammates, coaches and opposing wrestlers who were just as stunned as he was.

“I don’t know how to describe it,” DeBoer said. “It’s unbelievable.”

DeBoer tore through the tournament’s opening two rounds with back-to-back pins to advance to the semifinals, an accomplishment in itself that Tigers’ coach Larry Goodnature and DeBoer considered better than expected.

But the senior’s brief wrestling career wasn’t over. Not even close.

The unranked DeBoer faced No. 2-ranked Corey Anderson of Shakopee in the semifinals with a trip to the finals on the line. DeBoer led Anderson 2-1 after the first period but fell behind 4-3 after Anderson scored a takedown with 15 seconds remaining in the match. DeBoer went down when the wrestlers reset and quickly escaped and notched a winning takedown with seven seconds left.

The win was his first in a full three-period, six-minute match. He had lost the only one he competed in prior, and 32 of his 34 matches this season were decided by a pin.

DeBoer trailed the sixth-ranked Flemister King 3-0 in the second period in of the finals, before he flatted him with a bear hug and pinned him with 47 seconds left on the clock.

“That was our game plan all along,” DeBoer said. “We knew he liked to tie up, and we’ve been working on that bear hug for the last few months, so that’s what we wanted to do.”

After hugging Palmer, the champ lifted up Goodnature, who wrapped his arms and legs around DeBoer’s 6-foot-7-inch, 290-pound frame. Goodnature said in 40-plus years as a wrestler and coach, he’s never seen or heard about what DeBoer accomplished over the weekend.

“He brought his A-game to the state tournament,” Goodnature said. “He’s improved every time he’s stepped onto the mat, he’s gained confidence and it’s unbelievable to me.

DeBoer had uphill climb to step onto mat

When DeBoer stepped onto a scale last fall, he had a decision to make. He weighed 38 pounds over the 285-pound maximum weight allowance for heavyweights and was still unsure he wanted to wrestle in his senior year.

DeBoer wasn’t completely unfamiliar with the sport. He wrestled for two weeks three years earlier on Albert Lea’s ninth-grade team before opting to spend his winters lifting weights instead. He was a fan, but by the time his senior year rolled around, he knew little more than the classmates he attended wrestling matches with.

“I knew nothing,” DeBoer said. “I knew the basic rules but that’s pretty much it.”

Each year of DeBoer’s high school career, he was encouraged to rejoin the team. He was never begged or pleaded and his answer was always a simple “no.”

But during the summer before his senior year, knowing he had to lose weight before playing football at Bethel College after he graduated, DeBoer was bitten by the wrestling bug again.

He began working out once of twice a week with Palmer, working on the basics of balance and positioning. When DeBoer’s final football season began in August, he left the wrestling room and wouldn’t return until October when he finally decided to join the team.

He said he took it slow to start and made simple changes in his diet like cutting out junk food and soda and eating smaller, lighter meals.

DeBoer worked out daily at practice and used his family’s elliptical machine at night, often wearing sweatpants, a sweatshirt and jacket. He also ran twice a week with his teammates before school.

DeBoer’s coaches hoped to have the heavyweight on the mat by January at the latest, but by December he was just 20 pounds shy of the required mark and hoped to make his debut in the Tigers’ biggest regular season dual of the season, against Owatonna on Dec. 15.

DeBoer upped the intensity of his workouts and diet leading up to the Big Nine Conference clash and ate only an occasional orange during the week prior. He lost 13 pounds that week and by the time the Tigers boarded the bus to Owatonna, DeBoer had made weight.

Goodnature said when DeBoer announced he would join the wrestling team, there were a lot of people who doubted him.

Standing in the tunnel on the floor of the Xcel Energy Center, DeBoer bounced around waiting to approach Mat 2 in the state finals.

In his head he went through the gameplan he and coach Palmer had discussed: stay in good position and no risky moves.

“Me and Palmer worked on the strategy of laying low, weathering the storm and concentrating on the fact that it’s six minutes and I’m done with my wrestling career or the rest of my life,” DeBoer said. “I put my energy toward keeping my nerves calm, and I was ready. I wasn’t too nervous.”

DeBoer stuck to the gameplan and it paid off as he notched his 25th pin of the season for the title.

DeBoer called the moment “surreal” and said it felt like he won another individual tournament and he’ll be back in the wrestling room today for practice.

While it’s hard not to wonder what else DeBoer could have accomplished had he wrestled more than one full season, he said he doesn’t think about that.

“I’m kind of glad of how I did it,” he said. “I had a lot of fun in high school and I don’t regret anything. If I wrestled more I could actually shoot (for takedowns), but hey, it worked out.”

DeBoer’s photo will now be hanged in the Tigers’ wrestling room among the school’s other state champions and next to fellow heavyweight Berhow’s. While he won’t go on to wrestle in the Big Ten Conference or for a national championship team in college, DeBoer earned his title just the same — by winning when it mattered the most.

“He’s just a big kid, he finally figured out how to work the upper body stuff and he’s dangerous,” Goodnature said. “He’s something to be reckon with and he proved it up here.

“He deserves his state championship.”