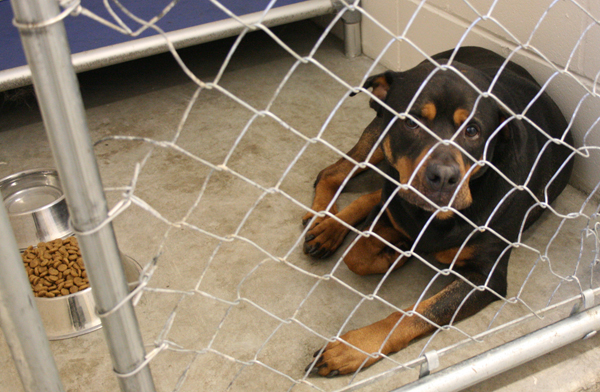 This dog Marley was taken into quarantine at the Freeborn County Humane Society Wednesday after he reportedly attacked and killed a cat on Fourth Avenue. He is expected to be in quarantine for two weeks, though what may happen after that is still undetermined. -- Sarah Stultz/Albert Lea Tribune

Albert Lean Tanya Blair was enjoying her day off work on Wednesday when her neighbor ran into her house and told her to come outside — immediately. 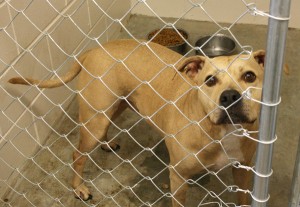 Leo, a pit bull and Labrador mix, was found with Marley out roaming the streets and is being investigated with the attack of a cat on Fourth Street.

By the time she did so, Blair said, she saw two dogs take off running. Her 15-year-old Angora cat named Cuddles was lying in her yard unable to move.

She said she and her neighbor slid Cuddles onto a piece of cardboard and then transported her to the Clarks Grove Vet Clinic, where Blair found out the cat had a broken back. She died shortly after.

Police said the investigation is ongoing about what happened that day — whether just one or both of the dogs attacked and killed Blair’s cat.

But for Blair, the incident is raising awareness about whether aggressive breeds of dogs should be banned in the city and how dog owners can better be held responsible for their animals’ actions.

Albert Lea Police Lt. J.D. Carlson said the owner of the two dogs identified one as Marley, a black American bulldog and Shar-Pei mix, and the other as Leo, a tan dog that is part pit bull and part Labrador retriever. Freeborn County Humane Society Director Christa Stieler described Marley as being more consistent with a Rottweiler mix.

Regardless, the two dogs are in quarantine at the Freeborn County Humane Society shelter.

Carlson said the dogs had been running loose around town for at least 90 minutes before the alleged attack in front of Blair’s house on Fourth Avenue. The dogs’ owner lives in the 1000 block of Newton Avenue and could not be reached for this story. 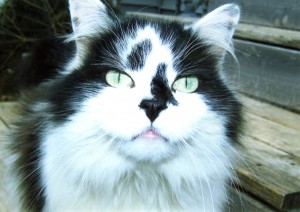 Carlson said Marley and Leo were first reported running loose down James Avenue at 3:32 p.m. Wednesday. At 4:26 p.m. dispatchers received a call of two dogs in the Hardee’s area, and then around 5 p.m. is when the alleged attack was reported.

According to Carlson, nobody saw the actual attack; one neighbor just saw the dogs standing over the cat. Blair alleged a man walking in the neighborhood saw the attack and actually tried to get the dogs away from Cuddles.

Carlson said when the dogs were finally impounded, they did not seem aggressive toward people, though Stieler said Marley was acting a little aggressive Thursday morning.

Blair said this is not the first time she was attacked by pit bulls.

She said last year she and her dogs were attacked by two pit bulls and then two other pit bulls were involved in a separate incident.

“Last year I was attacked; this year the cat’s gone,” she added. “It would have been different if she got hit by a car or died of old age.”

Blair, an avid walker, said she sometimes has to turn around and walk another direction when she approaches a pit bull. And she’s run into numerous people who allow their dogs to run without leashes.

“I’m not done with this until I can get a law to get them out of town,” said Blair, who talked with the city attorney about the situation Thursday.

She questioned why people can’t just take their animals to get their shots and be licensed.

“It’s the owners,” she said. “If you’re going to have these animals, you have to be responsible. Please be more respectful of your neighbor.”

Stieler said she was saddened when she heard about the incident and when the two dogs had to be quarantined.

“We were really working hard to change everyone’s view of pit bulls,” Stieler said. “They can be great family dogs.” 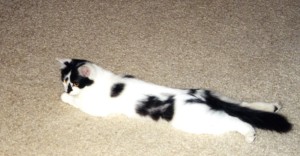 Cuddles, seen here when she was 2, plays on the floor.

She said the attack on Cuddles is tough because there is still some uncertainty about which of the dogs — or if both — is responsible.

As of Thursday afternoon, both dogs were expected to be quarantined for two weeks. She said she was unsure what will happen beyond that time or if one or both will be euthanised.

Carlson said the dogs’ owner initially said to put both dogs down, but later called back and asked that only Marley be put to sleep. He has reportedly previously attacked other animals.

Police cited the owner with dogs running at large and unlicensed dog. Neither of the dogs was licensed or up-to-date on shots.

The incident remains under investigation.

“Hopefully it will be an eye opener for a lot of people,” Stieler added. “Keep your dogs under control, and keep your cats in the house.”