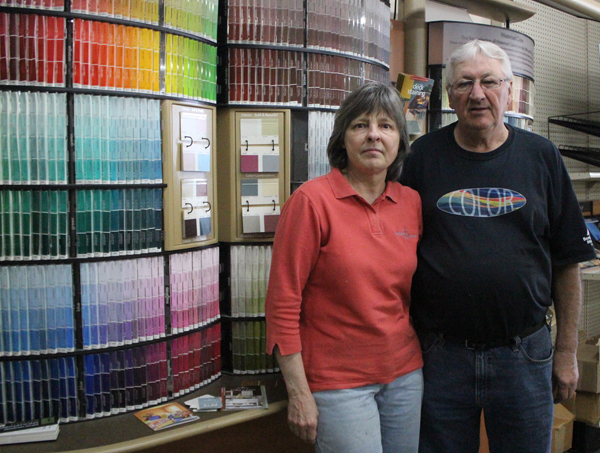 Ron and Nancy Hansen stand in their shop on West Main Street in Albert Lea. They’ve decided to retire after owning the paint store for 24 years. -- Kelli Lageson/Albert Lea Tribune

After 64 years in the community, Albert Lea Paint & Glass will close in April.

Current owners Ron and Nancy Hansen have owned the shop on West Main Street since 1988, making this their 24th year. 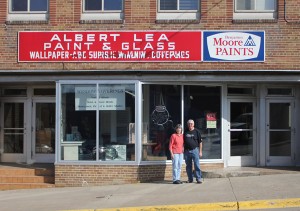 Ron and Nancy Hansen pose for a photo outside Albert Lea Paint & Glass in Albert Lea. The store will close April 28.

They tried to find a buyer for the shop but were unsuccessful. It’s not a franchise of Benjamin Moore paints, but a new owner would have had to be certified by the company to sell its paints.

Nancy said they’ve gotten busier now that some people have heard they were thinking of closing. Now that they have a close date, April 28, they’re trying to follow up with long-time customers to help them before they’re done. Nancy guessed she’ll always work in some capacity on window treatments and by appointment, but she’s looking forward to not having to be in the shop from 9 a.m. to 5 p.m. each day.

“I want to be able to get up and think ‘I don’t have to do anything if I don’t want to,’” Nancy said.

She said she’ll also be able to spend more time with her grandchildren and guessed that she and Ron would be able to golf more.

They’ve had loyal customers throughout the years who have been coming to them since they took over the shop. They’ve also had several dedicated employees, even though currently it’s just the two of them running the shop. The store was opened in 1948 and had two different owners before the Hansens took over in 1988.

Nancy said there’s been many fun stories and memories throughout the years. One that stood out in her mind was during a past medallion hunt for the Big Freeze festival, when they left the store to go look down the street at Morin Park. Nancy said a customer came in and realized no one was in the store and stuck around to make sure nothing happened. They also both remember the times that people bought a can of paint and promptly dropped it once getting out the door.

“Our alley’s been a few different colors,” Nancy said.

They will have selected items on clearance for 50 percent off, and Ron said there would be more sales closer to the closing date. They’ve let their inventory shrink as they weren’t able to find a buyer. The building, which is three floors, was listed for $85,000. They’ve seen a lot of changes in the downtown area since they first bought the shop.

“People would come in and shop on their lunch breaks,” Ron said. “Now there’s a lot of empty buildings around here.”

Nancy said she’ll miss her customers more than the actual work and said she’s glad she could help so many people over the years. Before they moved to Albert Lea they were living in Austin where Nancy owned a shop that sold wallpaper.

“We like the community a lot,” Ron said. “Living over there we never realized how pretty it was.”