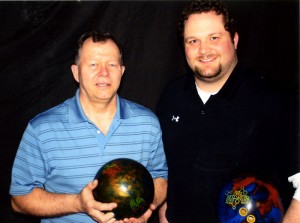 Paul Diemer, left, and his son Mike Diemer bowled perfect games within a few weeks of each other at Holiday Lanes. -- Submitted photo

Diemer said when he was getting close, he had to have a talk with his son Mike and calm down. He said he had been close before, and he didn’t want to mess it up.

It was all the more exciting for the father-son duo because Mike had bowled a 300 game just weeks prior on Jan. 4, the second in his career.

Mike has been bowling just four years and bowled his first 300 in March of 2011. After getting his second, Paul’s friends gave him a lot of grief for letting his son show him up.

At the time Mike bowled his most recent 300, the men were playing on separate teams on different nights of the week, but he called his dad right away.

“It was very touching being the first person he called,” Paul said.

After playing as a substitute on his dad’s team, Mike became a permanent player.

On top of bowling a 300, Paul was inducted into the Albert Lea United States Bowling Congress Hall of Fame last week. Paul said there are only about 25 people inducted so far.

Paul said as long as his health holds up, he will be bowling another 10 years, and Mike said it’s just the beginning for him.

Ironically, Mike tried bowling on a junior league when he was younger and didn’t like it and now he has two perfect games in the books.