A remote-controlled car. A loose tooth. And a simple idea. 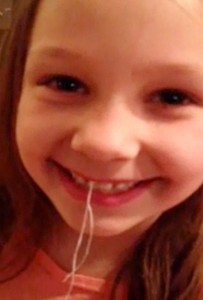 Add the three together and that’s the premise behind the winning video of the Tribune’s online funniest video contest picked earlier this month.

Seven-year-old Lauryn Delger of St. Charles is featured in the video.

During the video, Lauryn ties her tooth to a string, which in turn is connected to a car.

As soon as Lauryn moves the car with the remote, the tooth comes out.

“She grabbed her mouth like, ‘Oh my gosh,’” Lauryn’s mother, Kara, said.

Kara noted she and her husband, Jeremy had seen a similar video posted on Facebook. They showed it to Lauryn, who was preparing to lose her sixth tooth.

Kara said her daughter decided she wanted to try it out — and it worked.

The second-grader said she was excited to hear she won the contest.

She called her grandma when she found out the news.

She plans to put her prize money toward purchasing an iPod Touch.

Lauryn is the granddaughter of Tom and Kathy Sheehan of Emmons and Steve and Debbie Delger of Glenville.

Look to https://www.albertleatribune.com/category/contests/ for new contests.