Funeral services for Lorraine Dolores Severson, 80, of Clarks Grove, will be held at 10:30 a.m. Monday at Bayview/Freeborn Funeral Chapel. The Rev. Ryan Rasmussen will officiate. Interment will be at Clarks Grove Cemetery. Visitation will be one hour prior to the service. To sign the guest book, go to www.bayviewfuneral.com. 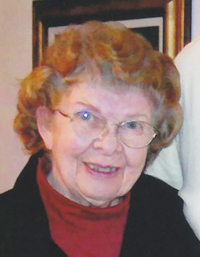 Lorraine Dolores Severson was born on July 1, 1931, in Albert Lea, the daughter of Walter and Doris (Hanson) Carlsen. She grew up in Clarks Grove and graduated from Albert Lea High School in 1949. On Nov. 5, 1950, Lorraine was united in marriage to Raymond Severson at the Clarks Grove Baptist Church. The couple moved to California shortly after. In 1953 the couple returned to Albert Lea and in June of 1954 moved back to Canoga Park, Calif. From 1955 to 1971 they resided in California. In 1971 Lorraine and Raymond returned to Minnesota and lived on a farm near Clarks Grove. Lorraine was a former member of the Clarks Grove Baptist Church and a former member of the VFW auxiliary. She was an Amway distributor for many years as well as a devoted wife, mother and grandmother. Lorraine loved flowers and plants, gardening, especially, raspberries and strawberries. She was well known for her wonderful homemade bread. Blessed be her memory.